Home Features Redefining Legacy, The People Behind the Plaques

Redefining Legacy, The People Behind the Plaques 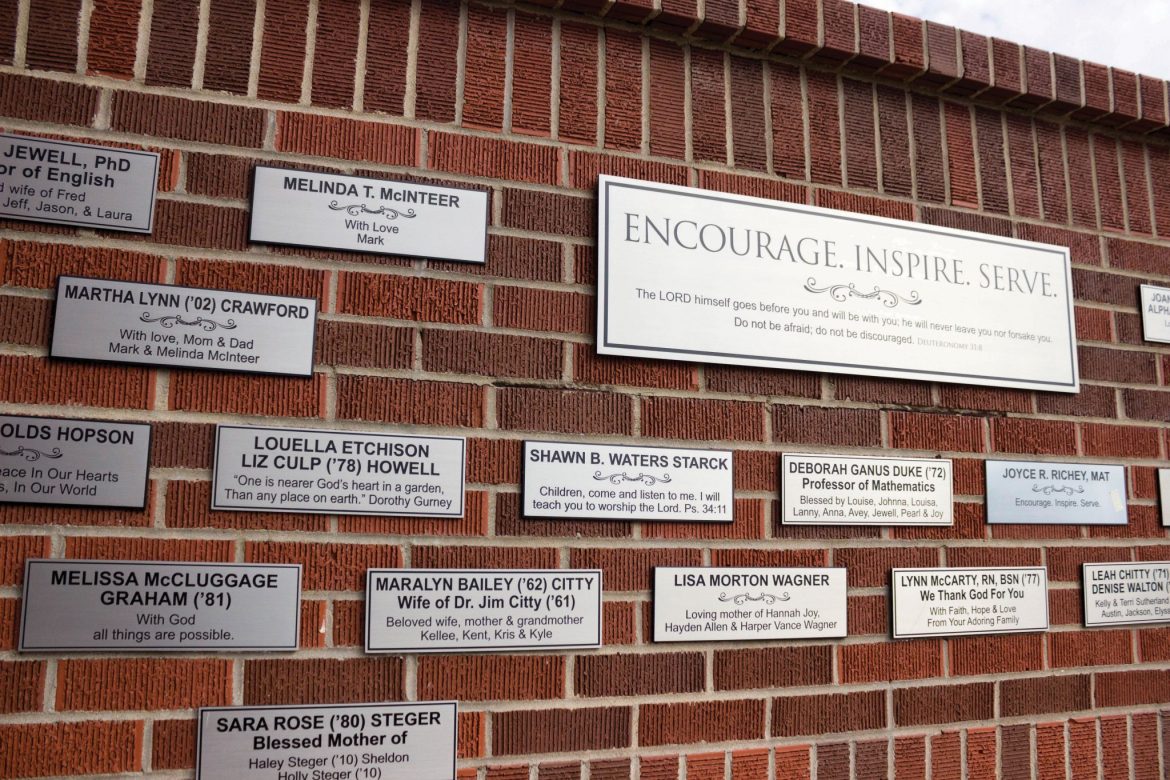 Ever since the dedication of the First Ladies Garden and Legacy Park in 2015, students have had many landmarks to peruse on their daily walks. However, the wide array of flowers, benches, fountains and buildings can distract students from a crucial part of those walks: the commemorative plaques. Liz Howell, vice president for alumni and parent relations, was in charge of getting these projects off the ground, and claims the women these plaques honor were the purpose for the garden.

“Every plaque tells a story, and most of the plaques are about people who have overcome great difficulties and how God has provided,” Howell said. “It’s very inspiring. There are single mothers who have sacrificed for their children to go here. There are mother-in-laws who have been honored for their roles in the lives of their daughter-in-laws.”

Howell said the intent of the initial project was to honor former first lady Leah Burks and the other first ladies, but she came to realize that there were so many important women that have contributed to Harding.

“The biggest (factor in the project) is the recognition of women and how much women have sacrificed for people to have the opportunity for a Christian education,” Howell said. “(The First Ladies Garden) was about the first ladies of Harding, but as the project developed, we soon realized that every family has a first lady: a mother, grandmother, or matriarch who has sacrificed for students to come here. Since that started, we have had a tremendous response.”

One of these plaques was dedicated to Edith Reaves-Barnes, who was honored by her nephew Roy Reaves, chair of Harding’s Board of Trustees. Reaves said he decided to make this contribution to his aunt because he believes she is the epitome of courage and perseverance.

“She’s one of the most courageous women I know of and she always had a burning desire for knowledge and a desire to pursue that at a great risk,” Reaves said. “That has been a huge inspiration for me and many others.”

Reaves said Reaves-Barnes was the valedictorian of her high school class as well as the first woman in the family to go to college.

“Her parents did not want their children to go to college,” Reaves said. “They felt like colleges were evil. In fact, my father had a full scholarship to go to college, but they were so insistent that he didn’t go. Edith was younger than my father — about eight years. At this point, she decided just to go against her parents will. She rode a bus to Searcy, Arkansas, for seven hours to a town and campus she had never seen. She had only a suitcase of clothes and she wasn’t even enrolled yet.”

According to Reaves, she worked two or three jobs on campus and it took her about seven years to get her first degree, but she kept on until she achieved her goal. She went on to earn multiple degrees.

“She stands for what’s right,” Reaves said. “She keeps on keeping on. She’s 89 years old, and still has that same courage and perseverance as a young girl… I would like for her to know what an inspiration she has been to not just my family — but everyone.”

“I think for me I just appreciate how much she cared,” Jones said. “She would always go above and beyond for everyone… If I wanted to get coffee, she would walk to Starbucks with me and ask me about my day. To this day, she will drive to Bentonville to see me and to speak with me about what is going on. And I think she would do that with everyone.”

In addition to the First Ladies Garden and Legacy Park, there are new plaques being put up in the recently added Secret Garden, the Two Magnolias, and the Serendipity Garden. Howell encouraged students to walk around and read the stories of these great women and to come talk to her in order to get further connected with these women.

Harding University Through the Decades