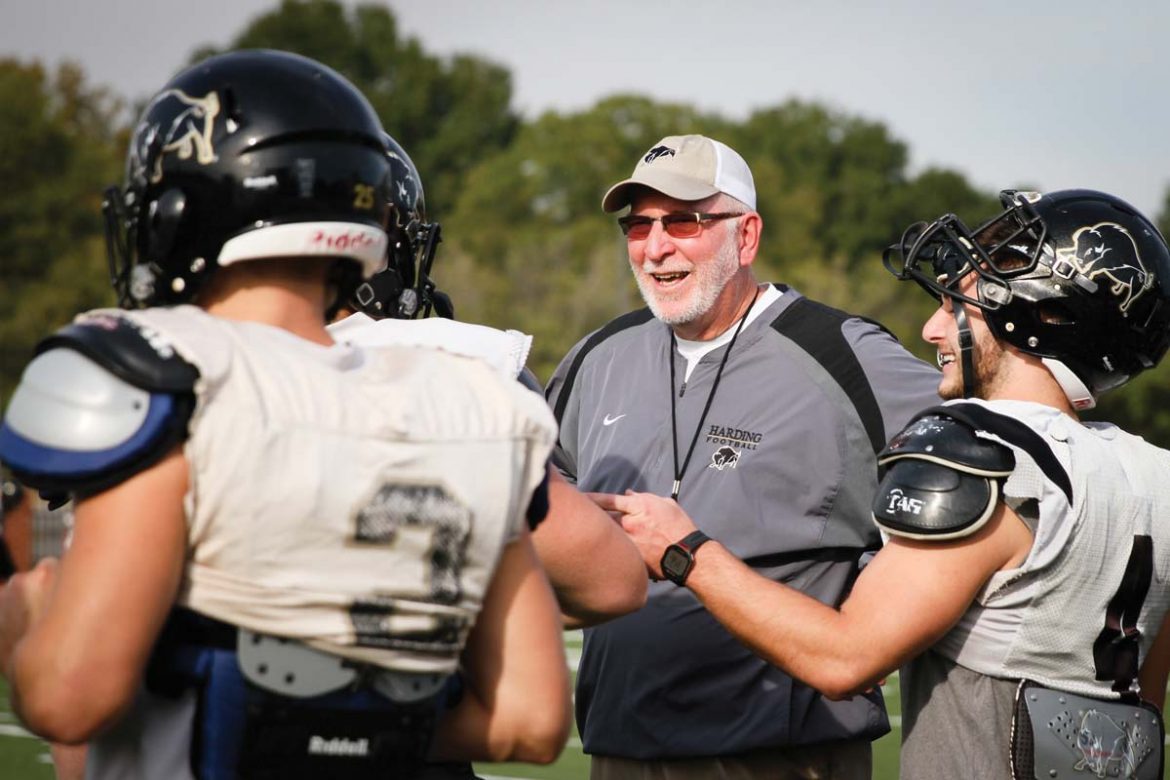 In an era of high-tempo offenses and inflated egos in the sport of football, head coach Ronnie Huckeba has gone against the grain both on and off the field. His unconventional style of leadership, exemplified by an unwavering commitment to faith and the triple-option, has brought about unprecedented success — namely an 8-0 record in this, his final season at the helm of the Bisons’ program.

Huckeba, a native of Claxton, Georgia, was an offensive lineman at Harding from 1973-1976, winning a conference championship in his senior season under head coach John Prock. After coaching at the high school level for several years, Huckeba returned to his alma mater in 1986 as an assistant to Prock.

“I was fortunate enough to get the chance to come back and coach with (Prock) in his last two years and that was really special to me,” Huckeba said. “It’s pretty special when your coaches are no longer your coaches, but they become your friends, and that’s kind of the way it worked out.”

During his years as an assistant coach, Huckeba said that being involved with Harding was a blessing to himself and to his wife Peggy, especially as they raised their children, Hope, Jeb and Jordan.

“I can remember very vividly when we used to have an offseason station in the gymnastic room,” Huckeba said. “In between, as the guys would rotate from station to station, there was about a five-minute time period, and I would let my boys jump on the trampoline. They couldn’t wait to come over and visit me in the afternoons during practice, and it was just a blessing for us to live in Searcy, work at Harding and have our kids go to Harding Academy.”

Having served 13 seasons as the Bisons’ defensive coordinator, Huckeba took over as the head coach in October of 2007, replacing his former college roommate, Randy Tribble. According to Athletic Director Greg Harnden, the decision to hire Huckeba was a relatively easy one based on his body of work with the university and his talent for connecting with college athletes.

“I learned early on of his abilities and talents, so I knew he had great leadership skills,” Harnden said. “He had been a defensive coordinator, he had been an offensive coordinator; I mean he had done the whole deal. When coach Tribble left, it was really a no-brainer for me — I went to Dr. (David) Burks and said this was who I wanted to hire, and that’s all there was to it.”

Taking over midseason, Huckeba inherited an air-raid passing attack that broke over 30 Harding records in 2007. However, a 2-9 mark in his second season left Huckeba questioning his team’s style of offense.

“As we progressed, I was seeing us do all these things offensively, but it wasn’t helping us win games,” Huckeba said. “I didn’t like how it was affecting our team; I didn’t like how when we needed to make a yard running the football, we couldn’t do it.”

In the spring of 2010, Huckeba made the decision to implement the triple-option offense back into the Bisons, program, citing a bowl game between the University of Missouri and the Naval Academy as his inspiration.

“Missouri probably had nine (future) NFL guys on that team — they were loaded,” Huckeba said. “Navy ran up and down the field on them — beat their brains in — and I said, ‘That’s Harding. That’s what we need to do. We need to return to our roots, we can build up our defense and keep them off the field by running the ball and eating up the clock.’ It’s been a really good thing for us, and I think it’s something that fits at Harding.”

In the seven years since the offensive switch, the Bisons are a combined 52-21, including three straight nine-win seasons from 2012-2014. However, Huckeba said he believes the program’s success has sprung not from a new offensive strategy, but from a commitment to God.

“At Harding, the framework of our relationships is all built around our faith and service,” Huckeba said. “That’s why when I became the head coach, the first thing I did was write on the board, ‘Honor God,’ and said from this day forward we’re going to do everything we can to make this the priority. I think that’s helped us a lot with our on-the-field success — I think it’s been the catalyst for it.”

Harnden also acknowledged the faith-based culture Huckeba has created and said that his ability to relay Harding’s message to the athletes has made him one of the best coaches in the university’s history.

“He’s developed this brotherhood where the chemistry, the bonding, the work ethic and the mission of the school just come together,” Harnden said. “It’s not just football, there’s a higher purpose, so I think his ability to get that across to the players, the parents and the community is just exceptional. He’s come in and taken a good program and made it an excellent program, so as far as winning games, I think he’s going to go down as probably our most successful head football coach.”

Having mentored athletes such as NFL-signees Ty Powell and Donatella Luckett during his tenure, Huckeba said that developing talented players to be great athletes — and great men — is what makes his job so enjoyable.

“The most rewarding part of it to me is watching them grow up,” Huckeba said. “It’s about building authentic men. If you focus on that maybe more than the football things, then you’ve got a chance to be successful.

With three regular season games left in Huckeba’s final year as head coach, the Bisons are 8-0 and ranked No. 5 in the nation, the program’s highest ever ranking. Senior safety Corey Bassett said that since he and the other 21 seniors will exit the program with Huckeba, the group is fighting to finish the season in line with the ideals their coach has instilled in them.

“It’s our senior year and it’s his senior year, so we’re all going out together,” Bassett said. “His legacy for me is just persistence, no matter what the scenario is or what battle you’re facing, no matter if you’re up or you’re down, just persist, and he’s pushed that since I’ve been here.”

When the Bisons’ 2016 campaign ends, so too will an illustrious football career for Huckeba. While he said he is excited about his new position in the Advancement Office, Huckeba said he will still keep his ties to the football program, now solely as a supporter.

“I’m a huge fan of this coaching staff and the program is in awesome hands,” Huckeba said. “You don’t invest 36 years in something without it being really special to you, so now I’m going to be Bison fan number one.”

Is NFL on the Decline?