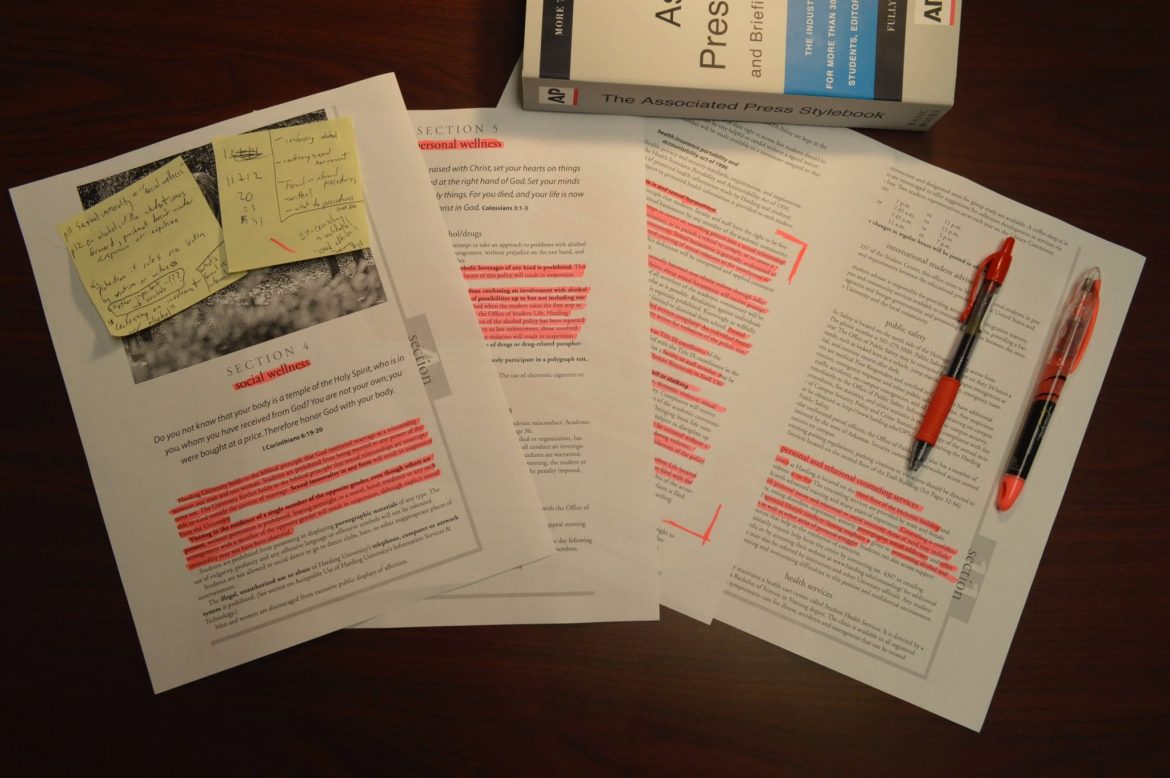 When it comes to the procedure for reporting sexual crimes, students are often uninformed or unclear as to what the handbook says, what it means, and what is not said. Found below are relevant excerpts from the handbook, as well as summary and possible implications.

In the student handbook, sexual misconduct is first addressed under section 4, “social wellness,” on page 11. The forbiddance of sexual misconduct is clear, though the language is vague, stating simply that “sexual immorality in any form” will be punished. Sexual immorality itself, however, is not defined, though it does including being in the home of a member of the opposite gender. The text below was taken directly from the student handbook.

“Harding University holds to the biblical principle that God instituted marriage as a relationship between one man and one woman. Students are prohibited from being married to any person of the same sex. The University further holds to the biblical principle that sexual relationships are unacceptable to God outside the context of marriage. Sexual immorality in any form will result in suspension from the University.

Alcohol and admission of guilt

While sexual misconduct is considered “social wellness,” consumption of alcohol falls under section 5, “personal wellness,” on page 12. Consumption of alcohol while on or off campus is explicitly prohibited, according to the handbook. However, protection is offered to students who come forth to the office of Student Life to confess “an involvement with alcohol.” By the language of the handbook, this protection applies — at least implicitly — to situations in which alcohol is not the focal point of the incident, if alcohol is reported on the front end. However, this would not extend to any but the first student to report an incident, meaning protection would not necessarily extend to potential witnesses or victims of an incident. No similar protection is mentioned in the handbook that would apply to cases of sexual crime, such as visiting the home of a member of the opposite sex at the time of a reported sexual crime. Below is the policy concerning admission of guilt as written in the handbook.

Confidentiality and the Counseling Center

The only resource of complete confidentiality mentioned in the handbook is the Counseling Center, under section 11, “Campus Resources,” on page 27. According to the handbook, the center’s counselors are available to help with “personal issues and relational or social concerns” at no charge. Among the provided list of possible areas of need include pornography and sexual addiction, but sexual crime is not specifically mentioned. The handbook promotes the Counseling Center as an avenue to overcome problems concerning alcohol, so confidentially seems guaranteed even when concerning issues that are explicitly against the rules. The following text regarding the Counseling Center is found in the student handbook.

“The Counseling Center at Harding is located on the third floor of the McInteer building and provides services to students at no fee. The counseling services are provided by male and female Christian professionals with advanced training and many years of experience. Counseling is confidential and offers help with personal issues and relational or social concerns. Areas of need may include dating, family conflicts, eating disorders, depression, anxiety, pornography, sexual addiction, and other emotional, social, and spiritual lifestyle conflicts. Strong emphasis is given to overcoming alcohol and drug related problems as well as other areas of personal struggle. Students can also access support groups and other resources that help in the resolution of concerns.

“A student may voluntarily request help from the center by contacting ext. 4347 or emailing counseling@harding.edu or by accessing their website at www.harding.edu/counseling/ for additional information. Students may also be referred by instructors and other University officials. Any student can obtain help in assessing and overcoming difficulties in this positive and confidential environment.”

Information specifically concerning sexual harassment and assault is found on page 36 under section 12, “general information.” According to the handbook, sexual harassment and assault may be reported to either the Office of Student Life or the Office of Human Resources, depending on the accused aggressor. Any student who believes he or she has been sexually harassed or assaulted may seek redress through “formal and informal procedures.” There is no provided distinction between formal and informal, or what either procedure would look like, except that formal procedures require a “signed and verified written complaint.” Additionally, only reports brought forth by the victim are mentioned in the handbook. No options are presented for a student who believes he or she has witnessed a sexual crime. The text from the handbook below addresses sexual harassment and sexual assault.

“Harding University reaffirms the principle that students, faculty and staff have the right to be free from sex discrimination in the form of sexual harassment by any member of the academic community. Sexual harassment is defined as an attempt to coerce an unwilling person into a sexual relationship, or to subject a person to unwanted sexual attention, or to punish a refusal to comply, or to create a sexually intimidating, hostile or offensive environment. Sexual harassment is generally understood to include a wide range of behaviors, from the actual coercing of sexual relations to the unwelcome or inappropriate emphasizing of sexual identity. This definition will be interpreted and applied consistent with Christian standards of behavior and conduct.

“A student who believes that he or she has been sexually harassed may obtain redress through informal and formal procedures of the University. Complaints about sexual harassment will receive prompt and equitable response. The right to confidentiality of all members of the academic community will be respected in both informal and formal procedures, insofar as is possible. Retaliation against individuals for bringing bona fide complaints of sexual harassment is expressly prohibited. Knowingly or willfully making a false claim is subject to discipline up to but not limited to dismissal from school. Formal procedures will not be initiated without a signed and verified written complaint. An individual found to have engaged in sexual harassment is subject to disciplinary action for violations of the policy, consistent with existing procedures.

“A student who believes that he or she is the victim of dating violence, domestic violence, sexual assault or stalking may obtain redress through procedures of the University. Complaints will receive prompt and equitable response. The right to confidentiality of all members of the academic community will be respected, insofar as is possible. Retaliation against individuals for bringing bona fide complaints is expressly prohibited. Knowingly or willfully making a false claim is subject to discipline up to but not limited to dismissal from the University. Formal procedures will not be initiated without a signed and verified written complaint. An individual found to have engaged in dating violence, domestic violence, sexual assault or stalking is subject to disciplinary action for violations of the policy, consistent with existing procedures.”Claims made by a student against another student are filed with the Office of Student Life located in Student Center 218. Claims made by a student against a faculty or staff member are filed with the Office of Human Resources located in the Ezell Building, room 130. A copy of the rights of the accuser and accused will be made available by the Office of Student Life at the time the complaint is filed. Further information may be obtained through the annual security report at http://www.harding.edu/DPS/.”

This analysis is one part of the Bison’s examination of reporting sexual crime. Our front page story can be found at “Would You Know What to Do?: A Closer Look at Sexual Crime Reporting on Campus.”