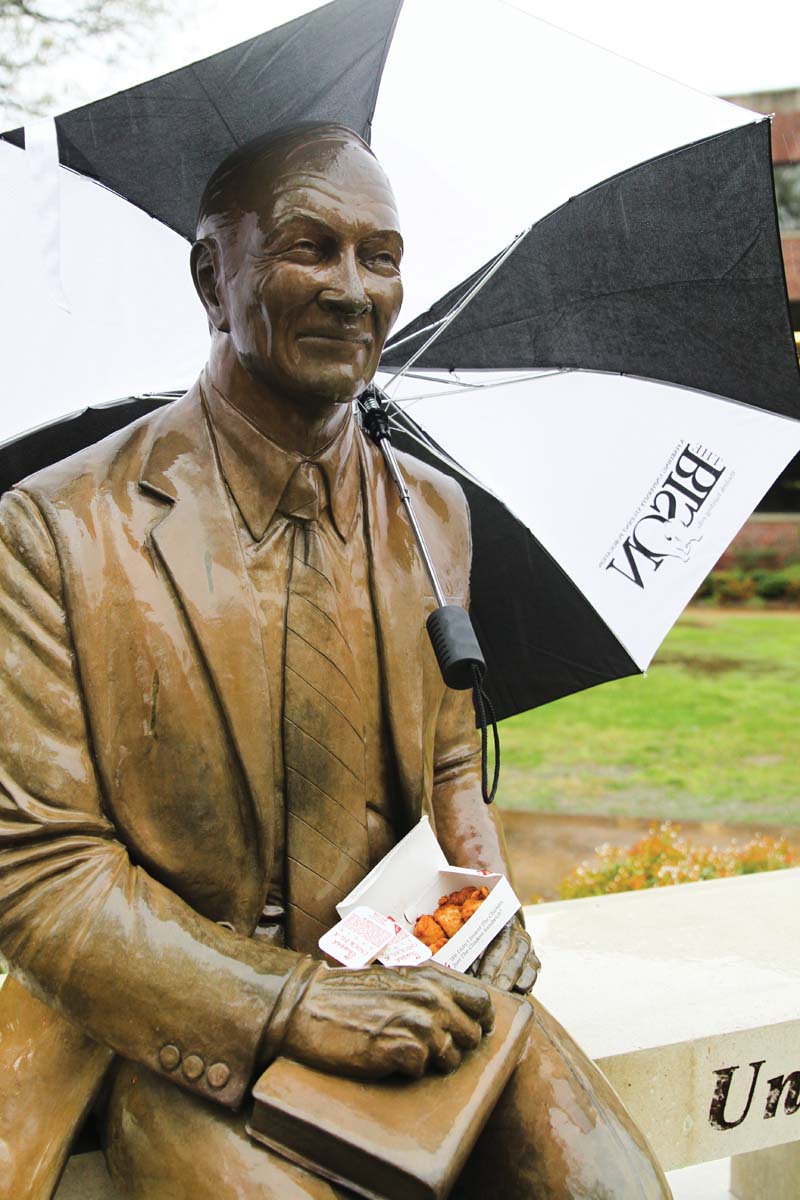 It has been six years since a bronze-coated Kenneth Davis, Jr., more widely known as Uncle Bud, was first placed on a bench facing the Administration fountain. With a Bible resting on his knees, the statue was made as a tribute to the former Harding chorus director and beloved prankster. Little did everyone know this would be Uncle Bud’s greatest trick yet.

At midnight on Wednesday, March 30, Uncle Bud stood up, shook off the puddles that had formed on his shoulders from the rain, picked up his Bible and sauntered off into the night with a satisfied grin breaking through the bronze mold. For six years Uncle Bud sat perfectly still, making thousands of people believe he was an actual statue.

“I really didn’t intend for it to go this far,” Uncle Bud said. “I wanted to see if I could fool people into thinking I was a statue for one day. Well, that bench was so comfortable, and the fountain was so beautiful, that I decided to try for a week. A week turned into a month, and a month turned into a year, and here we are six years later.”

In the beginning he said would leave the bench at night to get food and water, but eventually trained his body to survive without nourishment. According to Uncle Bud, the prank became a lesson in patience, as he had to endure countless scenarios to pull off this elaborate ruse.

“I can’t tell you how many pictures have been taken of me,” Uncle Bud said. “Every time there was a formal, I knew I had to brace myself for hundreds of photos and formal dresses. By the third year all of the dresses just started to look the same. And there are only so many different poses girls can do in front of the fountain — that part definitely got old.”

Uncle Bud said he has worn countless leis, T-shirts, hats and sunglasses over the years. In addition to being dressed up, Uncle Bud has been climbed on by toddlers, admired by the elderly and even given an umbrella to shield him from the rain. From his bench, he has been witness to numerous important moments.

Because of his prime position, he has a front-row seat to watch all of the many pranks that have been pulled in the Administration fountain. Uncle Bud said that while he has kept a list of all of the offenders, he has not yet decided if he is going to turn anyone in.

“I’ve seen every prank that has been pulled in the Administration fountain for the past six years,” Uncle Bud said. “Soap in the fountain? Good one. Let’s try to get a little more original, people. I remember once when a group of guys decided to fill the entire fountain with marbles — that was hilarious.”

Uncle Bud said he decided to call it quits because he could not resist the smell of the cafeteria’s chicken nuggets any longer.

“I could hear Mrs. Norma’s sweet voice floating across the Front Lawn, and I knew I just couldn’t stand it any longer,” Uncle Bud said. “I had to get me some of those chicken nuggets. They were totally worth it. I regret nothing.”

According to Uncle Bud, he plans to return to his seat on the bench, so as not to disrupt any of the important events on campus. But he did express that he would be grateful if students would bring him some of the cafeteria’s chicken nuggets — or any type of chicken nuggets — whenever they get the chance.

The story above is part of our “April Fools Edition.” No factual value should be taken from this story.

Lawn-A-Palooza aims to bring student body together with games, live music and food