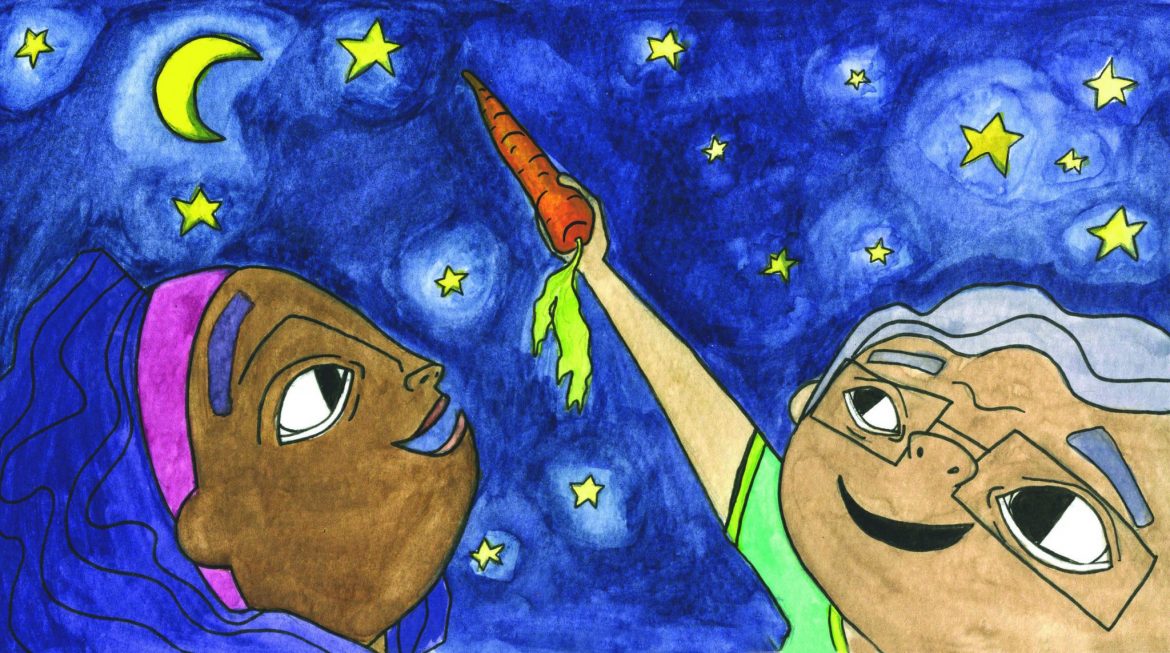 Once upon a time in a land far, far away, a young girl stood by her grandfather and used a carrot as a telescope to look up at the stars.

At least that is what senior child life major Elizabeth Walton wrote in her almost completedchildren’s book.

For Walton’s senior honors capstone project, she is working on a children’s book that encompasses facts about nutrition and how certain foods can strengthen different parts of the body. The book, still untitled takes place over the course of one day when an elementary-aged girl visits her grandfather, Grandy, who shows her how various healthy foods can help her in multiple activities.

Walton said she geared this book toward children to give them a clearer incentive to eat healthy foods.

“We’re really stubborn people sometimes,” Walton said. “If someone tells you that you have to eat your broccoli, you don’t really want to. But if you can make it fun, a child doesn’t even realize that you’re instilling facts in them to make them think about (why they’re eating what they’re eating).”

To help readers better understand the concepts in the book, Walton asked sophomore graphic design major Rachel Gibson to illustrate the story. Each page will depict a different activity the nutrients received from healthy foods can help someone do. Walton said she made a point to ask Gibson to illustrate a variety of activities to appeal to a wide range of readers.

Walton said she gave Gibson freedom to draw whatever she wanted with few guidelines. The finished product, Walton said, was different than she originally thought, but was still exciting.

“Seeing Rachel’s illustrations was so incredible,” Walton said. “I am good at imagining and coming up with things, but I cannot draw or illustrate any of that kind of stuff. Getting to share my idea with someone and seeing what they produced from it was really cool.”

Gibson said she agreed to illustrate the book not only because it would help her with her future career aspirations, but also because she believes artwork in children’s books is important.

“(Illustrations) expand your imagination,” Gibson said. “It helps you create the stories for yourself. When you get older, you don’t have to do that with the aid of illustrations. For young ages, though, it helps them to step into the world easier. It’s kind of a foundation for their imagination.”

Walton said she hopes the nutritional facts, as well as the illustrations, will be beneficial for children. Senior nursing major Lauren Noblitt read the book and said the facts in the book are applicable to everyone.

“The book is so cute and catchy, but it also does a great job at teaching kids about healthy foods,” Noblitt said. “I think they would connect with the foods in the book that they liked and be really excited about them. It would give the parents a great opportunity to further education about nutrition.”

Walton is presenting her finished book with the illustrations on April 14.

Finding a path for the ‘trapped’: The second installment of “The Path from Invisible Captivity” series