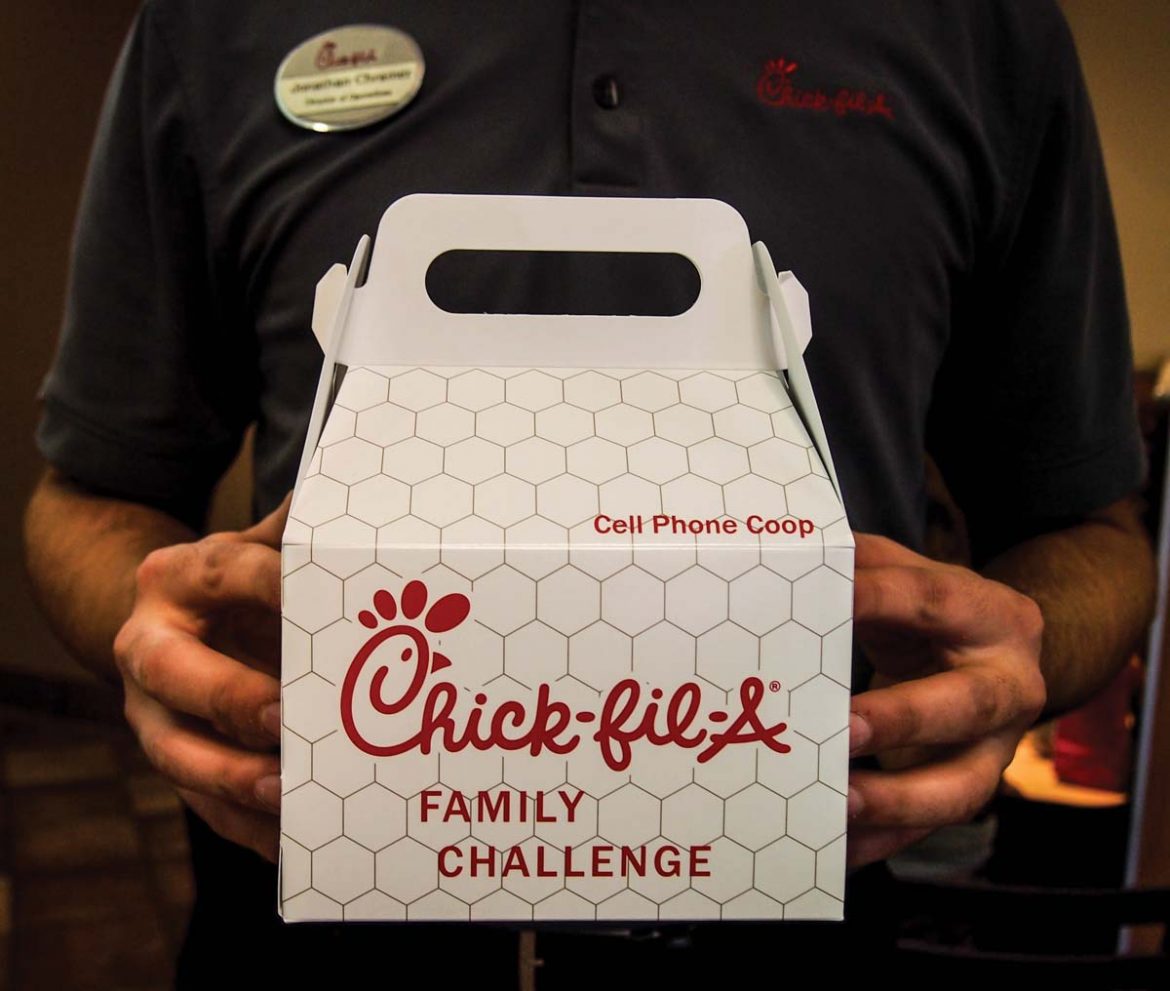 The urge to pick up a cellphone during a meal is a common temptation in today’s society. Far too often, people are conversing less with others at the table and more with their phones. In response to this trend, Chick-fil-A has started a new challenge concerning cellphones that is spreading across their restaurants nationwide.

According to official Chick-fil-A media outlets, Brad Williams, a Chick-fil-A franchise owner in Suwanee, Georgia, developed the “Cell Phone Coop” challenge in response to seeing customers paying more attention to their phones than to the people around them during a meal.

“Americans now spend an average of 4.7 hours per day on their phone, according to a 2015 Informate Mobile Intelligence study,” Chick-fil-A said in a press release. “Although our phones were meant to bring us closer together, they can sometimes have the opposite effect.”

Wanting to convey the value of face-to-face conversation to customers at his restaurant, Williams introduced the “Cell Phone Coop.” The “coop,” a small, square box on each table, challenges customers to enjoy a meal without the distraction of cellphones to receive a free Chick-fil-A Icedream.

“I’ve seen this addiction to technology worsen at such a rapid pace in just my lifetime,” Williams said. “People have gone from having meaningful interactions with one another to constantly being on their phones and other technology.”

The catch is that guests can only complete the challenge successfully if cellphones remain in the “Coop” for the entire duration of the meal.

“The challenge has completely taken off,” Williams said. “We have families who don’t make it the first time, either because they ended up texting or something else, but then they come back and try it again. Now we even have people asking to take the boxes home with them.”

Matthew Harbin, owner and operator of the Searcy Chick-fil-A, said that a shipment of “coops” has been ordered and should be in the restaurant within the next week.

“This idea has become a trend in other locations, and it has gotten positive feedback,” Harbin said. “Our customers have been asking questions about the ‘coops,’ so we want to provide this opportunity to them.”

Following this line of thought, sparked by Chick-fil-A’s initiative, perhaps people will be able to return to talking to each other instead of talking to their phones.

“Those who use cellphones during meals aren’t making a conscious decision to do that,” Harbin said. “The ‘coops’ will serve as a physical reminder to focus on other people at the table, and not their phones.”

“I had no idea this challenge would get so big — we didn’t even publicize it outside our restaurant,” Williams said. “I just want to see if we can play a small part in helping the families within our community reconnect. It’s what we’re all about.”

The biggest bang for your buck

If I only had the words