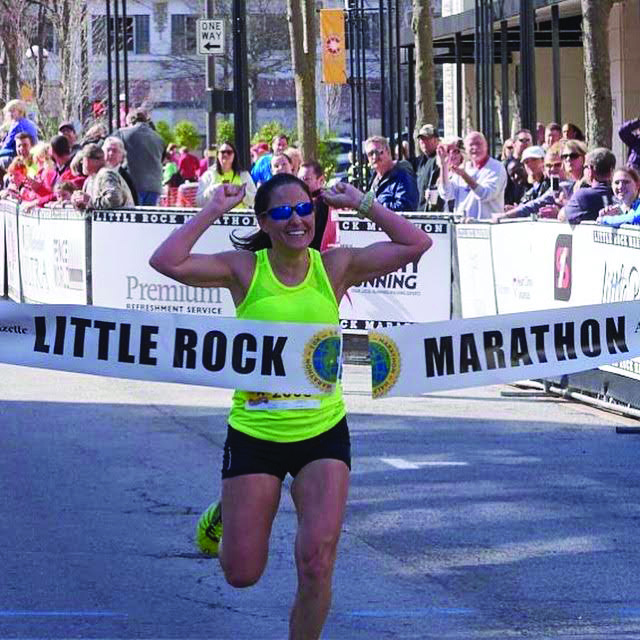 Tia Stone, alumna and literacy lab director for the Cannon-Clary College of Education, finished the Little Rock Marathon in three hours and 23 seconds on March 6. Out of more than 6,000 race participants, Tia Stone finished first in the women’s division.

“I was immediately greeted by Joyce Taylor, the Elite Marathon coordinator, and then seconds later (my husband) and the kids, who had been waiting for me at the finish,” Tia Stone said. “I loved having them right there. I was able to hug them before all the interviews started. For the next 15 minutes, various Arkansas television reporters and newspaper journalists interviewed me. This is not something I am used to at all. It felt very surreal.”

In preparation for the Little Rock Marathon, Tia Stone ran three marathons consecutively in October, November and December. Stone said she also set a goal to consistently train outside so she would be prepared for any kind of weather on race day.

Stone ran track and cross-country for Harding from 1997-2001. Stone and her husband John ran a half marathon together in 2009, and Tia Stone said that sparked her desire to run again.

“(My husband) John wanted to run the Little Rock Half Marathon, and I thought, ‘Really?’ because I had not done a half marathon,” Tia Stone said. “We each ran during the week on our own, then we did a longer run on the weekends together. As soon as we finished I thought, ‘I want to do this again. I can’t wait.'”

After running a half marathon, Tia Stone began training to qualify for the Boston Marathon. Now she runs anywhere from six to 10 hours a week and has participated in 14 marathons total.

“I ran the Boston Marathon for the first time in 2013. That was the year of the bombing,” Tia Stone said. “I was waiting for a friend at the finish line, and she had just crossed when we heard the bombs. We thought they were cannons because it was Patriots’ Day.”

Even when she is not running, Tia Stone not only coaches Harding students through the 5K/10K kinesiology class but also runners all over the world.

“On the side, I coach runners around the country, and some in other countries, that are training for marathons, half marathons and different events,” Tia Stone said. “I coach them online, and I send them different training plans every week that are customized to them.”

The Arkansas Grand Prix is a series of 20 races that Road Runners Club of America members can compete in and receive points based on finishing order of the races listed. Tia Stone, the president of Searcy Rush Running Club, participated in this running series last year.

“We started a club in Searcy that runs in (the Arkansas Grand Prix), and last year our Searcy women’s team won overall for the state,” Tia Stone said. “It took all year to win because you add up points from each race. It was our first year to ever have a club, and everyone asked ‘Who is Searcy?’ because Little Rock is the big running club in Arkansas. So Searcy came out of nowhere, and we took the lead for women.”

Tia Stone participates in runs of various durations from two miles to 26 miles and trains for the next run in between races.

“This sounds crazy, but a big part I love is the training for a marathon,” Tia Stone said. “It’s so much more intense than other distances. You have got to put in the training, and there is just so much that goes into it, but you get that out of it during the race.”

Tiia Stone teaches that to begin training for a race, it’s important to start off slowly and to set achievable goals.

“Any goal that you have ­— running, spiritual, or fitness — you have to make the time for it,” Tia Stone said. “You can’t use the excuse ‘I’m just too busy now,’ because you can do it now. If you start making a few smaller sacrifices and get into the habit now, it will make it easier later.”