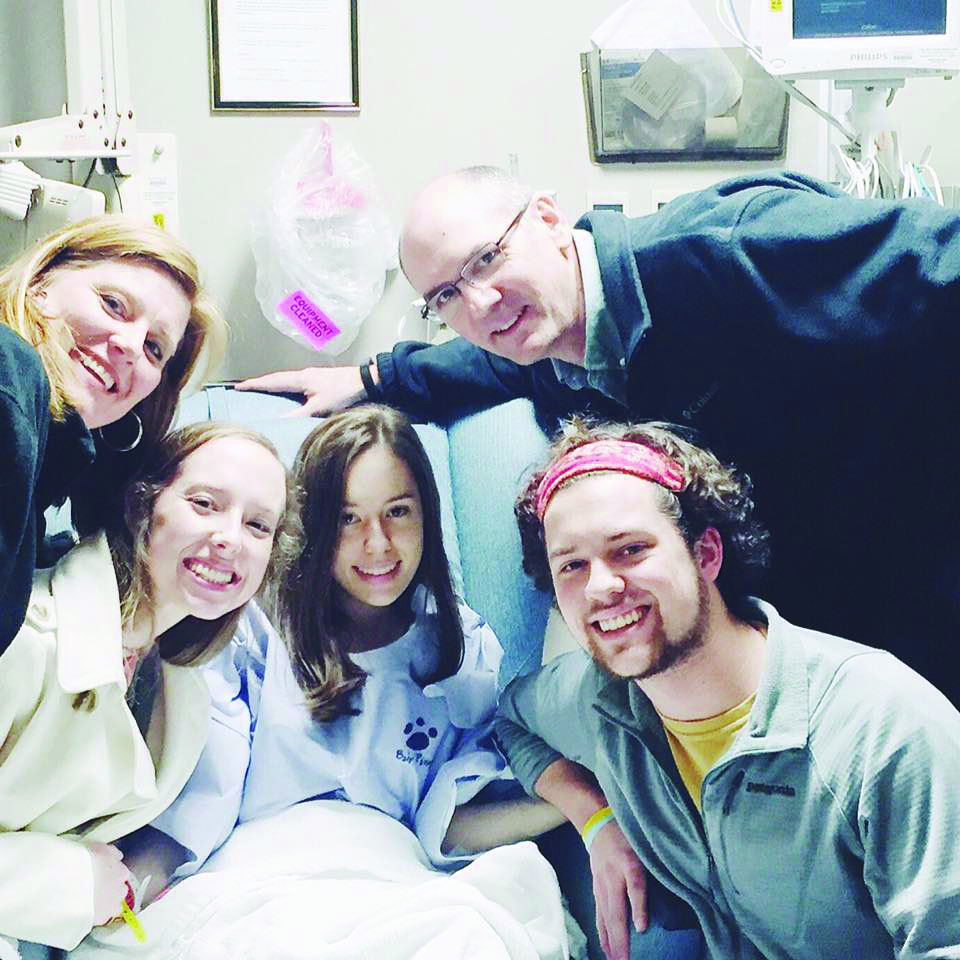 Maegan White lay nauseated in the hospital bed of the intensive care unit (ICU). She was thin, sore and connected to IV fluids and a machine that monitored her heart rate, blood pressure and respiration rate. A nurse entered her room and asked the 23-year-old patient to squeeze her hand, flex her toes and answer questions about her name and date to monitor her neurological functioning after her third brain surgery.

Maegan White was diagnosed with mononucleosis (mono) and pertussis (whooping cough) during her last two years of high school, and she grew more ill through her first two years at Harding University. She acquired stomach pains that suppressed her appetite, and she lacked the energy necessary for school. In 2012, Maegan White returned to her home in Huntsville, Alabama, and began visiting various doctors for answers.

According to Maegan White’s brother, senior Austin White, she was undiagnosed and misdiagnosed for approximately two years before doctors theorized she had a neurological disorder that caused her autonomic nervous system to work improperly. Maegan White experienced constant headaches, impaired vision, lack of balance and severe stomach pain whenever she ate.

“Nobody really understands the progression or what caused it or why it progressed the way it did,” Austin White said. “I can’t make her feel better … She’s my sister, my best friend; what affects her, affects me.”

An ophthalmologist ordered an MRI test, which revealed a Chiari malformation (CM), a structural defect in the brain that affects approximately one in every 1,000 births, according to the American Association of Neurological Surgeons. Lauribeth White, Maegan White’s mother, learned of a boy who had been healed from the same condition after surgery from a medical mystery TV special on NBC. The family contacted the boy’s surgeon at the Chiari Institute in Long Island, New York.

Maegan White had her first brain surgery on Sept. 2, 2015, to correct the CM. A piece of bone that pushed into her cerebellum was removed, and the first two vertebrae of her spine were fused to relieve pressure on the brainstem and spinal cord. It was the third attempt to have the operation due to complications before the first two scheduled.

Senior Jenna Montgomery flew to New York to support the family during the brain surgery. Montgomery said she is a friend of Austin White and met Maegan White for the first time when she arrived in New York.

“We were relieved that it was happening, but we were also terrified,” Montgomery said. “Meeting her made the surgery hard for me, too, in a way.”

Montgomery said she sent Maegan White notes and gifts with women’s social club Zeta Rho, of which Maegan White and twin sister alumna Morgan White were members, and felt she came to know her first through letters and prayer.

“She is one of the most uplifting people I have ever met in my life, despite her circumstances, and even when I was standing in the doorframe talking to her, she was asking me questions,” Montgomery said. “She doesn’t like the attention being on her — she wants to focus on other people.”

Maegan White received a second surgery on Sept. 13, 2015, after a cerebral spinal fluid (CSF) leak was discovered. According to Lauribeth White, Maegan White was regaining her vision and balance, and her blood pressure was normalizing after the operation.

Several weeks after the second surgery, Maegan White woke up with a headache resulting from another CSF leak. Her third surgery took place on Jan. 8.

“Tomorrow will be my third brain surgery, the third time I hug my precious family goodbye, am wheeled away to the operating room and get to trust Jesus in a way that I never knew before,” Maegan White wrote in a Facebook post on Jan. 7. “It honestly makes me nauseous to think about what I’m walking back into, but I have hope, hope that whatever God’s plan may be (even a plan that is drastically different than mine), from an eternal perspective, it will always be immeasurably more than all I ask for or imagine.”

Maegan White returned home within a week of her third surgery but began experiencing severe spinal headaches approximately two weeks later. According to Lauribeth White, Maegan White’s symptoms have not subsided since her previous surgery and a fourth surgery is scheduled for Feb. 26.

“I tell people I would never wish this on anybody because it’s very hard because you just feel so helpless,” Lauribeth White said. “As a mom, you want to fix things (like when they are little and scrape their knee), this is not that way … but it’s been a blessing that I’ve seen Maegan’s faith, how strong she is, how much she relies on Jesus.”

Sophomore Ellen Horton became close friends with Maegan White when she attended the same church in Alabama. Horton began raising money to buy an iPad, in conjunction with women’s social club Zeta Rho and her home church, for Maegan White to use while she traveled to doctor visits. According to Horton, people were generous, and extra money was raised for Maegan White to spend on herself. Lauribeth White said the iPad has been a blessing, and Maegan White uses it often.

“Watching anyone suffer that you love can never be easy,” Horton said. “I’ve been to some doctor’s appointments with her and watching her be in excruciating amounts of pain makes my heart break, (and) I would be lying if I said that I haven’t ever questioned why God brings so much pain onto a faithful follower of him. However, Maegan never doubts his presence. Watching her be so faithful and selfless makes me realize how God uses pain of this world for his ultimate glory even though we don’t understand it now.”

“To me she’s really inspiring,” Firquain said. “She has carried herself with so much grace and so much trust in God to heal her, and to carry her, and to use her as a vessel to show other people his love.”

Students are welcome to send Maegan White notes of encouragement. Austin White may be contacted for more information.

“It’s not what we had pictured, but it’s what the Lord had set before us,” Lauribeth White said. “We’re trying to enjoy each day, and (the Lord) has been so faithful to provide what we need each day to get through the days — the hard days and the good days.”

A Message to Apple Customers