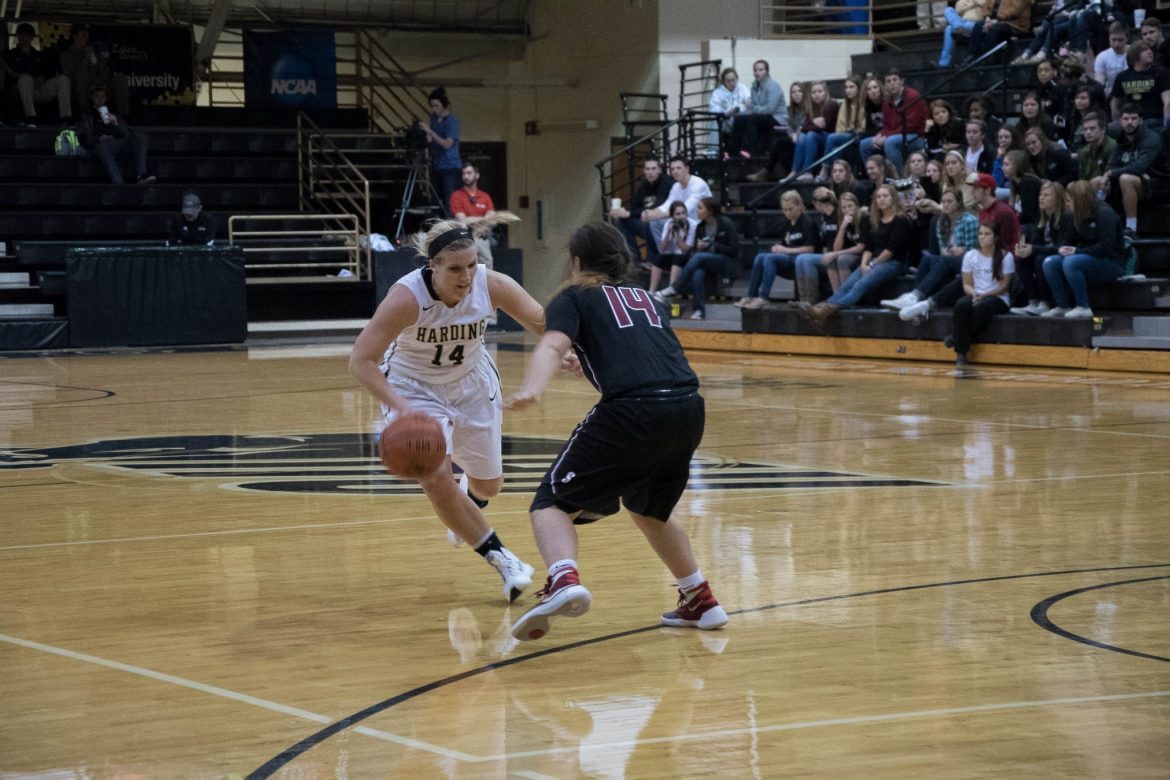 Balanced scoring led the Lady Bisons to a 70-51 win over SNU inside the Rhodes-Reaves Fieldhouse on Thursday, Dec. 3, as four players scored at least 12 points.

Junior guard Andi Haney, who scored 15 points in the win, said the team’s defensive scheme was the key.

“We’ve been working on defense because its something we can always control,” Haney said. “We played good team defense and that gave us opportunities offensively as well.”

SNU has been led by junior guard Abby Boyd all season, but Haney and the Lady Bison defense were able to limit Boyd to just 13 points, five off her season average.

“We knew they had one girl who could go off at any time,” Haney said. “Those teams are always dangerous because if you key on that girl too much, you give up easy baskets to other players.”

As the Lady Bisons’ most experienced player, Haney has taken the role of leader this season after the team graduated four seniors a year ago. According to sophomore guard Falan Miller, Haney has done a good job of picking up the slack.

“(Haney) is normally guarding their best player and she just does a lot for the team,” Miller said. “We’re pretty young so it helps to have experience.”

Miller showed her skill in the Lady Bisons’ 81-70 win over OKBU on Saturday, Dec. 5, by sinking a 3-pointer to break a fourth-quarter tie and finishing with 18 points. Sophomore forward Sydney Layrock led the team with 23 points in a game that proved much more competitive than the SNU victory.

According to Miller, a mid-game let down on the boards allowed OKBU to get back into the game after Harding jumped out to a 13-point lead in the first quarter.

“We started off really well and then kind of got in a funk,” Miller said. “We let them get too many extra shots.”

Haney said she was not surprised by the OKBU comeback but was proud of how the team responded.

“One thing with our conference is you can’t get a big lead and not expect them to fight back because all of the teams are so tough,” Haney said. “I was proud of the way the girls fought and kept attacking the basket until the end.”

Tied atop the GAC standings, the Lady Bisons appear well on their way to a repeat as conference champions. Haney and Miller both attest the early success to teamwork, instilled by head coach Tim Kirby.

“Coach (Kirby) always does a really good job of getting us ready,” Haney said.

Miller agreed and said that everyone has a hand in one player’s individual success.

“If (Haney) didn’t drive the ball or (Layrock) wasn’t posting up down low, I wouldn’t get the open shots,” Miller said. “We’re all still learning, but it’s always a team effort.”

The Lady Bisons next game is against Christian Brothers University in Memphis, Tennessee, on Dec. 30 at 1 p.m.