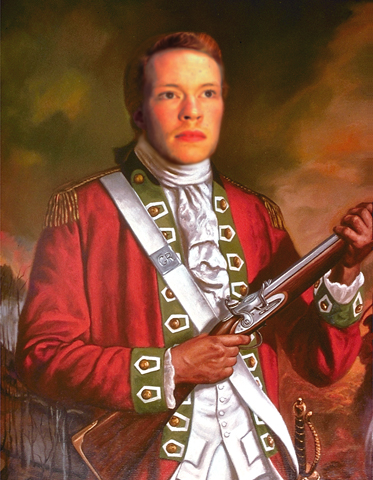 Being a good marksman covers many platforms. One must be able to aim, shoot and hide well, sometimes for hours before seeing and eliminating a target. Being able to remain silent as to not alert the target is another characteristic of a good marksmen, but not for Captain Patrick Ferguson.

My gosh, this guy is cool. Hang in there with me. Ferguson was a Scotsman and the best shot in the British army in 1777. He was known for being able to fire off seven rounds a minute with a muzzle-loader rifle, which was almost double the amount of the average soldier. Ferguson recognized how crippling the reload process was, so he developed his own rifle: the Ferguson rifle. Basically, it was a black powder rifle with a hatch that opened at the base of the hammer, so one could load black powder quicker.

Ferguson stuck to a code. Unlike all good marksmen nowadays, Ferguson refused to shoot anyone who wasn’t aware of his presence. When a colonial leader came trotting by, completely unaware of Ferguson, Ferguson and three others snuck into position to pick him off. He was overwhelmed with disgust by the idea of such a sneaky act, and told his men to hold fire. He stood up and called to the officer riding, who looked back at him and began to ride away. Ferguson called again, this time lifting his rifle and taking aim. The officer looked back again, but turned his back and rode away.

Ferguson couldn’t bring himself to shoot the man with his back turned. The next day, Ferguson learned the identity of the officer. The man who turned his back on Ferguson was none other than General George Washington. Upon hearing this, Ferguson recounted the event.

“I could have lodged half a dozen balls in or about him before he was out of my reach,” Ferguson said. “But it was not pleasant to fire at the back of an unoffending individual, who was acquitting himself very cool of his duty — so I let him alone.”

This kind of integrity in a man or woman is more rare than a 12 karat diamond. One of the greatest shots in the world at the time chose to spare a man whose back was turned. Captain Ferguson had complete power over General Washington’s life, but instead chose mercy and allowed him to write history from that day forward.

Mercy isn’t a word we often use anymore. Not many people in our society are humble enough to ask for mercy, but that doesn’t mean that there aren’t those who have the opportunity to give it. Choosing to be kind instead of ruining someone’s reputation or speaking positively about those who deserve it the least are situations we face every day, but sadly, most of us (including myself) tend to take the shot. I challenge you this week to feel the same disgust Captain Ferguson felt, and lower your rifle to those who turn their back to you.