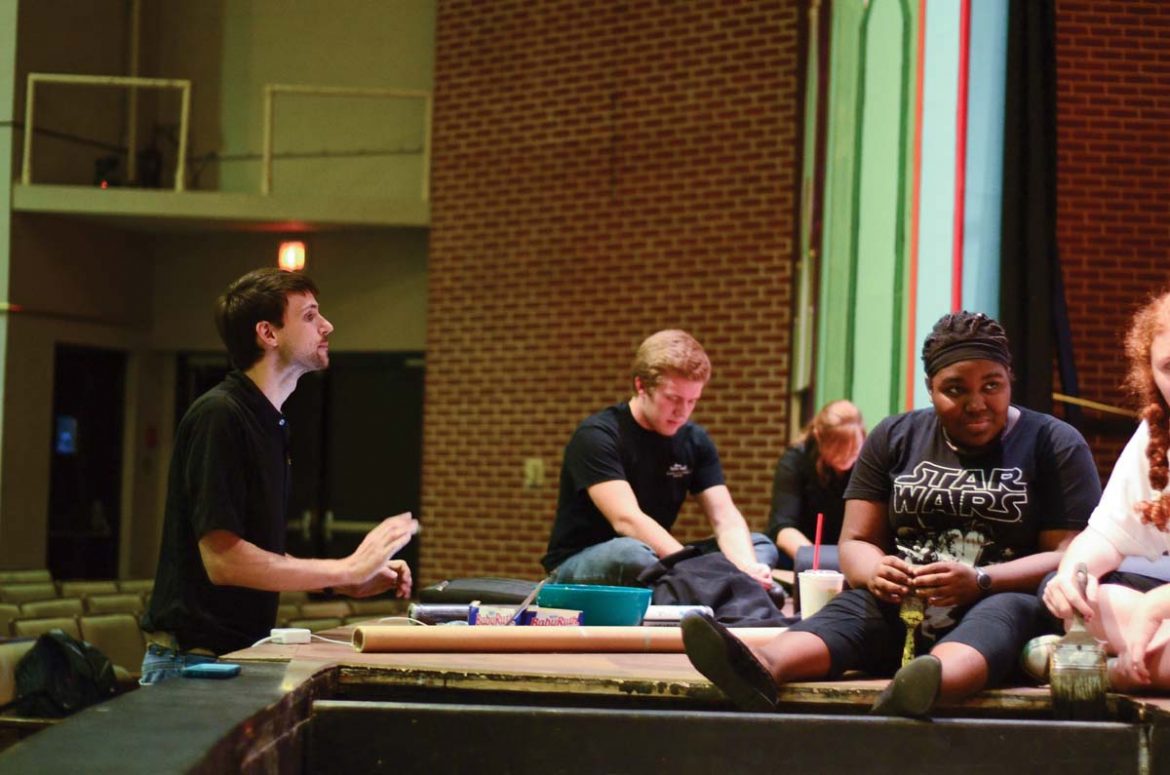 He is a drafter, carpenter, welder and painter. He has visited Neverland, Far Far Away and the Little Shop of Horrors.

Seth Fish is the assistant technical director for the Harding Theatre Department, and he makes magic happen.

“In theater I get the chance to live 1,000 lives through acting, experiencing, watching a play and getting other people’s perspectives through these plays,” Fish said. “It helps me to live those different lives.”

Fish works with technical director and instructor of the Harding Theatre Department Ben Jones to determine how the set of a play may be completed from a prototype designed by the director and set designer of the play. Fish and Jones then work with student crews to build and install the set.

“Each day I don’t know what I’m going to build next,” Fish said. “It’s very different in all that I do, so I don’t ever get into repetition. My job is to make sure people don’t realize how much goes into the show (and) to make sure you follow the magic.”

Fish graduated from Harding in 2008 with a theatre degree and left for Tennessee to work as the assistant technical director for Freed-Hardeman University. In 2012, Fish and his wife moved to Japan where they taught English through Oklahoma Christian University for two years before returning to Searcy.

Britton Lynn, associate professor of theatre, is the set designer and properties master for the Homecoming musical. Britton said he met Fish during his first year teaching at Harding 13 years ago.

“I have an incredible amount of respect for Seth,” Lynn said. “He’s always been highly invested in his work, which is fun for a teacher to watch, and even more rewarding now that we are colleagues.”

Fish said he performed in plays as a child and became more involved in high school. He said theater gives him the opportunity to fulfill his ever-changing dreams.

“Insanity is graduating from college and doing the same job for 50 years,” Fish said. “My dreams were not always, ‘what do I want to be,’ but ‘who I want to be’ … My dreams were always more obscure, just changing, and theater always helped me find a way to do those.”

In addition to working as a craftsman, director and backstage manager, Fish serves as a mentor to the students he oversees while building sets year round.

Junior Hannah Fraser, a member of the student work crew, said even though this is her first semester working with Fish on a set, she considers him a friend.

“He really does care about us and he gets to know us,” Fraser said. “He’s a really good boss, he helps out and he’s good to talk to.”

Fish said he sees God everyday while working with students, encouraging and preparing them to be missionaries in the theater world.

“One thing I learned in Japan is being a missionary is a mentality, not a destination, so everything you do is a mission field if you put your mind to it,” Fish said. “Theater is a mission field in that there are very few people professing God’s name in the theater world (because) you’re working very intimately and closely with people who think the exact opposite of you.”

Crews work several hours a week and consist of students from various majors. Fish said the art of creating the set is successful when all students coordinate together.

“The reward for my job is always having the lights turn on and the audience (gasp), having a set piece disappear and people clapping for it,” Fish said. “Those are the moments I live for and really make my work valid, and (it is) what we go for. Those magical moments of making the audience go ‘that’s so fantastic,’ and really appreciate our art.”

Manager for the musical

How to properly date your internship