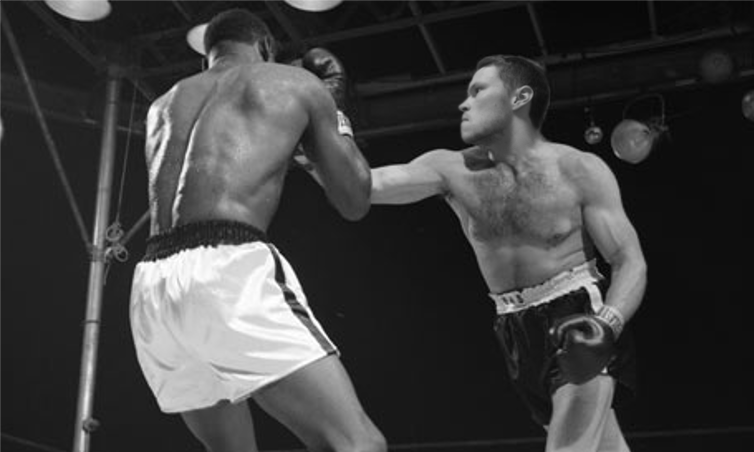 James Walter Braddock was born in Hell’s Kitchen in New York in June 1905. He was the son of immigrants from Ireland and lived a life that seemed to allow him to just get by. When he was young, he dreamed of playing football for Notre Dame, but quickly learned that he was more brute than brains.

When Braddock was older, he trained to become a boxer. From the beginning of his career at 21, he was good. He became famous within a few years for his solid right hand and for being able to take hit after hit. Braddock set his mind to becoming the light heavyweight champion, so much so, that he fought under the name James J. Braddock, a middle initial that both previous champions had.

Braddock was strong and made a name for himself in his youth. However, as years went on, his chronic hand injuries caused him to lose several matches. Soon, the Great Depression made its way to his hometown, and all but drove him and his family to the streets. Married, with three children, Braddock was forced into working at the docks and collecting social assistance from the government to provide for his family. Braddock endured the humiliation of having to accept relief money, but was lifted up by the Catholic Worker Movement, a social justice group that helped care for the homeless and hungry.

In 1934, the beaten down Braddock was given a courtesy fight against the highly recognized John Griffin. For Griffin, this was simply a warm-up match, and it shouldn’t have been a problem to best a washed up, beat up old fighter. I don’t know if it was because Braddock realized the gravity of even getting the chance to fight again, or if it was God himself pulling the same move that he did with Samson, but when that bell rung for the third round to start, Braddock knocked Griffin on his back — out cold.

Advancing, Braddock got a fight with John Henry Lewis, the top pick for light heavyweight champion. Braddock, still motivated not to lose, dropped him as well.

Braddock finished climbing the ladder to the championship by defeating Art Lasky, leaving him on the mat with a broken nose. Braddock was then given the opportunity to fight the World Heavyweight Champion, Max Baer.

The 6′ 2” monster of a man laughed at the idea of fighting a down-and-out old boxer like Braddock, and he hardly trained for the match. Braddock, however, trained as though every second of the match would count.

“I’m training for a fight, not a boxing contest or a clownin’ contest or a dance,” Braddock said. “Whether it goes one round or three rounds or ten rounds, it will be a fight and a fight all the way. When you’ve been through what I’ve had to face in the last two years, a Max Baer or a Bengal tiger looks like a house pet. He might come at me with a cannon and a blackjack and he would still be a picnic compared to what I’ve had to face.”

Braddock had fought through the lowest of lows and refused to allow mockery to hurt his pride. Baer coaxed the crowd of 30,000 people to tease the Irish man.

The match began, and round after round, Braddock refused to go down. He took several hits, but was said to have never stopped hitting back. In the end, what caused Braddock to win the fight wasn’t his strength, it wasn’t the fact that he wore Baer out — he outlasted him. This match is regarded as one of the most astounding upsets in boxing history.

James J. Braddock was never too down to not look for the comeback. It has been said that people change in college, sometimes for the worse. When they do, some will dismiss the people who change as failures. If you are one of those who have hit rock bottom, don’t ever think it’s too late for a comeback.

Blockbuster 3: Rise of the Board Games