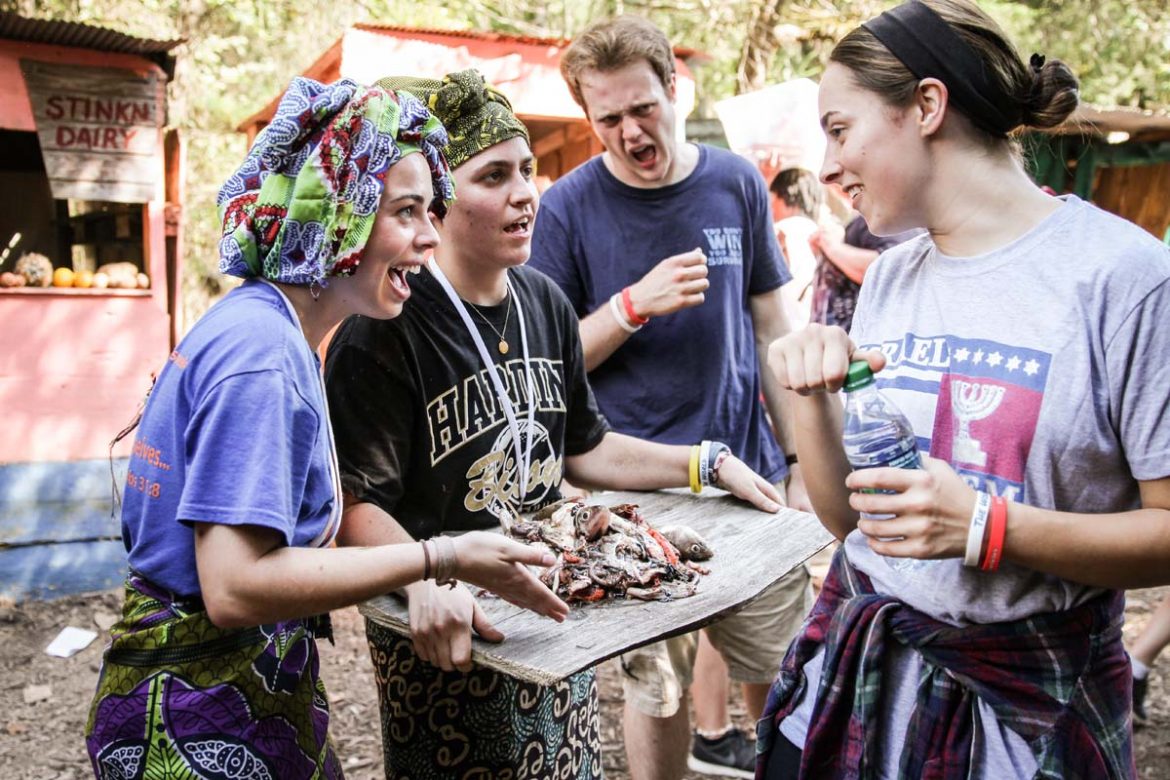 Approximately 187 students dedicated their lives to the mission field during the Global Missions Experience (GME) at Camp Tahkodah on Thursday Sept. 17. The students symbolized their commitments by leaving a painted footprint on this year’s GME mural displaying the weekend’s theme “Relentless.”

“I normally shy away from leadership positions but took a leap of faith and accepted one this time,” Whitaker said. “I knew (GME) would provide me with amazing opportunities to pour into students interested in full-time long-term mission work, and I would have the opportunity to meet well-established missionaries and other people like Kent Brantly, who I would not normally get to interact with and receive wisdom from.”

About 10 committees were created. According to volunteer committee member senior Brittany Nichols, nearly 80 people worked the event. She said the organization and enthusiasm shown by staff and participants coupled with prayer led to a successful weekend.

“I volunteered because I went to GME my freshman year,” Nichols said. “I wanted to help contribute to someone’s great experience at GME just as the past volunteers had done for me.”

The 12 classes and 27 learning stations were run by 60 presenters from 30 countries. Learning stations included focuses on ministry opportunities ranging from beekeeping and brick making to crisis counseling and the inner city.

“This year’s GME had a strong emphasis on sharing faith and spiritual conversations through learning stations,” Daggett said. “It also means so much to me because it provides an intense and rich opportunity to unplug from material pursuits, to listen to God and network with spiritual heros.”

Daggett said GME hit a record number of students who stayed all weekend in the Global Village, the side of Camp Tahkodah designed to give a realistic environment of seven different cultures. Of the 190 students who stayed in the village, 100 were in the refugee camp, which resembled tent cities of refugees globally.

Each participant was able to experience shopping in a third-world market and the challenge of preparing a family meal with food obtained with the artificial money provided. Volunteers acted as vendors, drunks, beggars, soldiers, the mentally ill and outspoken American evangelists.

“All around the world people work hard for small amounts of money, food or wares that they then take to markets to barter and bargain in order to take as much food home as they possibly can to their families,” Daggett said. “(Students) learn what it’s like for families to live that way everyday.”

“I have never been to a foreign country, so for me it was a wake up call and reminder of how blessed I am,” sophomore Zachary Cowdery, head of the worship committee, said. “People yelling and talking in all different languages was something I had never experienced.”

After the voyage through the market, groups hiked to a campfire site to build a fire and prepare a meal with the food retrieved.

“As I sat eating really bland rice and potatoes, it really hit me that this is more food than some people get all day,” Cowdery said. “How can I think about complaining about that when I already had breakfast and will have dinner in a couple of hours?”

Saturday’s dinner illustrated the world hunger crisis with the real world banquet. Twenty randomly selected people sat at a nicely set table and were served a three course steak dinner while the remaining thousand participants sat on the ground around them with a small serving of bland rice and beans without silverware and a cup of dirtied water.

Whitaker said the purpose of the banquet was to put into perspective eating in established nations compared to the rest of the world.

The commitment ceremony followed the dinner and included keynote speaker Greg McKinzie, worship and an opportunity for participants to dedicate themselves to missions. Of the 187 people who made a commitment, 150 are current or previous Harding students.

Junior Wyatt Palmer placed his footprint beneath the Latin America symbol on the mural. He said GME inspired him to change his major from Criminal Justice and Leadership and Ministry to Bible and Ministry.

“I realized that God is calling me to go into his work a little quicker than anticipated,” Palmer said. “I feel called to long term third-world missions and I want my major to be something that reflects my desire of living a life of kingdom work and kingdom building.”

Daggett said he wanted to help with GME because it provides students time to worship and meditate on God’s purpose for their lives.

“For me personally, I really need to re-examine my life to think more about others than myself,” Cowdery said. “(I need to) stop complaining about the problems in life and actually get up and do something about them.”