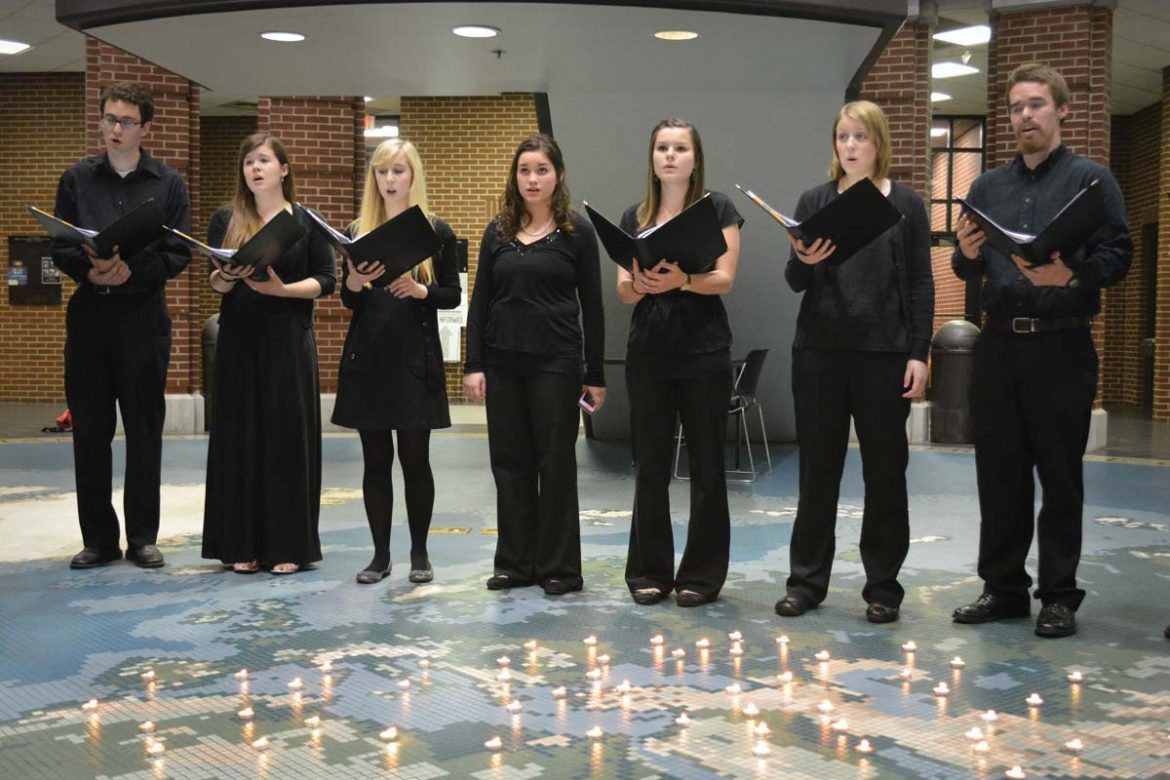 Students and faculty members gathered together to honor victims of Islamic State in Iraq and Syria at a memorial in the McInteer rotunda on Oct. 20.

The memorial consisted of prayers and songs sung by the chamber singers to honor and remember the Christians getting persecuted by ISIS in the Middle East.

The idea for the memorial came from a class project given by Bible professor Bill Richardson for his World Christian class.

“Part of the process for getting this together was choosing the songs and the literature that we were going to be singing for tonight,” senior Janine Locke said. “We’re singing in the atrium so people could pray on their own.”

Candles were strategically placed on certain areas of the global map on the rotunda floor to honor the victims of ISIS. The countries targeted were Syria, Palestine, Turkey, Israel and Iraq.

“They just kind of symbolize the Christians that are in the Middle East, and there was an arch connecting them to the Christians in North America,” said junior Carly Taylor, one of the students in charge of the memorial project.

According to junior Austin Westjohn, another student who helped organize the memorial project, one of the things that may help with the issues going on in the Middle East is church planting.

“There are so many people that have not been reached, and so often we go to the areas that are reached,” Westjohn said. “Missionaries go to areas where the church can expand, but we need more church planting in those areas, which is a hard task to do because anytime you find out about a church that’s been planted, it’s going to get crushed by this type of group.”

According to Locke, the most important thing that Christians here in the United States can do is pray.

“All we can hope to do is pray and stay constantly in prayer, because I think a lot of times we get complacent, and we just want there to be a constant uplifting of the situation to God,” Locke said. “He knows about it but he’s going to pay way more attention when there are so many people just constantly lifting them up in prayer.”

According to junior Megan Otten, the memorial helped put things into perspective.

“I felt like coming here was really good because on one hand with everything going on with visitation, it’s good to realize that even though we have problems with school and stuff, it’s not as bad as what some people are going through,” Otten said. “It’s kind of good to redirect your focus and your thoughts to be thankful for the things that you don’t have to face and also be mindful of those who are facing it.”

I Heart HU promises to be out of this world