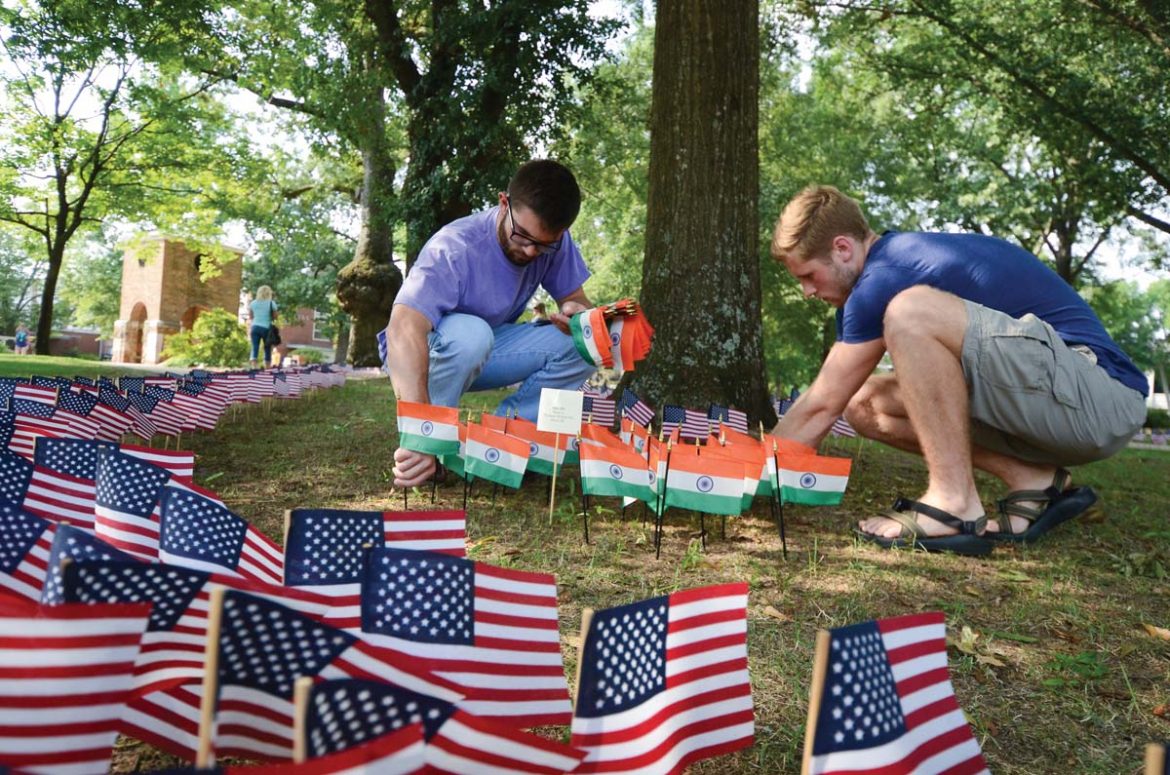 Memorial flags representing the lives lost on 9/11 were positioned on the front lawn on Wednesday, Sept. 10.

“On the front lawn there are 2,999 flags, (which is) actually the most current figure because they’re still using DNA to identify victims as recently as last month,” said Bob Reely, associate executive director for the American Studies Institute.

“We put about 380 international flags, but when they read the names every year, there’s way more than 380 names, that you can go ‘oh that’s an Italian name, that’s Irish,'” Klein said, ” (There are) thousands of ethnic sounding names that are out there. That’s what this country is about.”

The 9/11 project serves as a humbling experience for those who place the flags.

“It’s interesting, it’s a physically humbling thing to put these flags out,” Klein said. “You kind of have to get down on your knees or get down on the ground to really work it out right, and so it puts a lot of people in a prayerful posture.”

Judith Hart, the food service director for Aramark, views the flags as a way to remember her cousin Malissa White, who worked on the 99th floor of the twin towers.

“They represent just a reflection of her life, and it just warms my heart to know that the university cares so much about not only my cousin, but all the 3,000 plus individuals that died on that day,” Hart said.

For other members on campus, the flags represent fear for future generations and the problems that they may have to encounter. Reely said he would love for all his grandchildren to be able to visit HUG, but with the turmoil in the Middle East, being a Christian can be dangerous.

Even though the 9/11 flags represent a time of sadness for many, others look at it as a beacon of hope and a reminder of God’s presence.

“I actually went out there this morning, and as I was walking to the flags while it was raining, I just heard the word from the Lord saying, ‘He leadeth me beside still pastures, and he restoreth my soul,'” Hart said. “So seeing the flags is just restoration.”