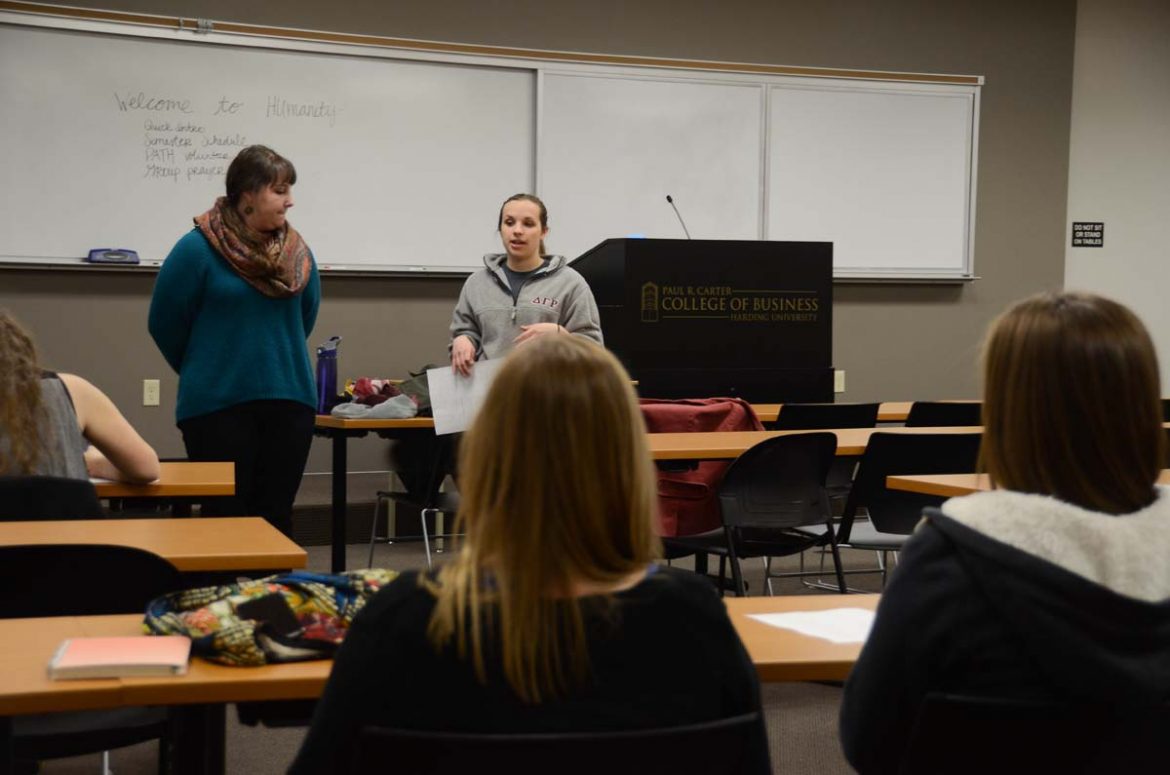 Among the many organizations on campus, HUmanity stood out as a group advocating for social justice. 2012 alumna Jessica Kirkham and senior Ashli Roussel founded the organization in the spring of 2012. That same semester, HUmanity began an International Justice Missions chapter; the organization also partnered with Little Rock-based Partners Against Trafficking Humans.

“It isn’t always sexual, it could be labor driven as well,” Allen said. “You don’t have to go international to make a difference in the lives of others.”

Bailee Searcey, the vice president of HUmanity and senior general studies major, added that trafficking is something that could hit closer to home.

“The issue isn’t just in a far away country,” Searcey said. “It is happening right here in Searcy, in any town you can think of.”

HUmanity held many fundraisers to help international and local victims of human trafficking. By showing documentaries and selling bracelets, HUmanity joined International Justice Missions’ 27-hour stand for freedom. Twenty-seven coincided with the 27 million people in trafficking slavery today. This year, HUmanity hosted Freedom Week for the second time, filling the week with events commemorating the victims of trafficking and raising money to donate to PATH, IJM and Not For Sale, another organization fighting trafficking.

HUmanity also worked closely with PATH, with several members attending the PATH training, which enabled them to work closely with women rescued from sex trafficking.

“We have had volunteers go up there nearly every week, which is really awesome because of the relationships we have formed with the ladies,” Allen said. “It amazes me every time I go because even though they have been through so much, it’s really amazing to see how God is working in their lives and how much we have to learn from them.

Junior member of HUmanity Dylan Treadwell said he knew that more men should be involved in the issue.

“It is a very girl-dominated organization, due to the nature of the victims,” Treadwell said. “However, men need to be more involved because the men are the ones controlling the victims. Men are responsible, and men should be helping to fix the issue.”

The leaders of HUmanity have continued to learn and grow within the issue of human trafficking. They provided service work in a shelter in Little Rock as well as took their own initiative to learn through training workshops in order to better protect those in a trafficking situation.

Allen said that it was very simple to describe HUmanity even though human trafficking was not a simple issue.

“Passion, Prayer, Purpose,” Allen said. “Passion is not only where the group formed, but it takes passion to help the victims. Prayer: anyone can pray, and the more prayers, the more action can be taken. Purpose: everyone has a purpose and no one in a trafficking situation can find theirs until they have help.”