At Harding, there were students from a variety of different countries experiencing the challenging transition of attending university. Attending school in a foreign country made that transition even more difficult. Organizations such as Harding’s African Student Association existed to make that transition easier by helping students meet others from their part of the world.

“There was a need for African students to belong,” senior Nnaemeka Eze, president of HASA, said. “So many students come here fresh out of Africa. We don’t know anything about the U.S. or have any family or friends here. So HASA is kind of like a family away from home for students.”

HASA, which began in 2007, hosted a variety of events and activities throughout the semester, from soccer games to dance lessons. One of the major anticipated events that they have every year was an African showcase that celebrated African culture. The show, titled “A Night in Africa,” consisted of theatrical skits, animated dances, vibrant music and their traditional fashion show that showcases colorful, savvy clothing from the culture.

“The fashion show is something we do every year,” junior Latifah Booker, the vice president of HASA, said. “One of those things we always want to showcase is the African attire and culture.”

Last year’s African showcase was centered on South Africa and the apartied that took place during the time of Nelson Mandela. The event started with an elegant dinner at Harding University’s cafeteria with dishes from South Africa. After the dinner, the audience transitioned to the Administration Auditorium where they were greeted with a dramatic entrance from the cast of different countries migrating to South America. Other featured performances were a solo from student and HASA member senior Sisan McNeil and a vibrant dance performance. There were also some skits integrated in the show. The skits were part of scenes from the movie “Invictus”, which was about Nelson Mandela’s first term as President of South Africa and his struggle trying to get rid of apartied and unite the country.

The 2013 show was not only a success in terms of entertainment, but it also was a success in giving back. The proceeds, about $1,500, went to the country of Somalia.

The 2014 show maintained many traditional elements, but boasted a few surprises.

“Each year we have a region for the theme,” Booker said. “This year we pretty much want to do everything, all of Africa, bits and pieces. We are going to be pulling in a lot of outside people and getting them involved.”

HASA was open not only to African students but to students from any culture and background. The organization celebrated African culture and gave students a chance to bond with each other while experiencing a taste of African Pride at Harding. 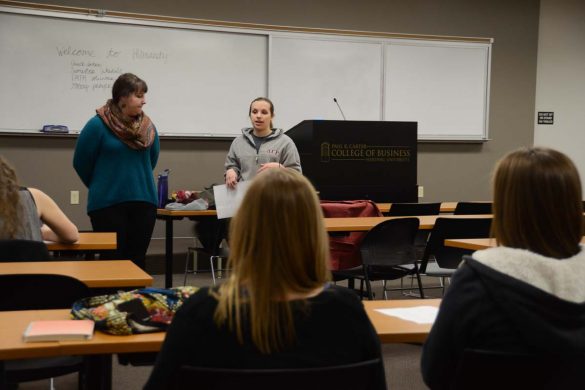