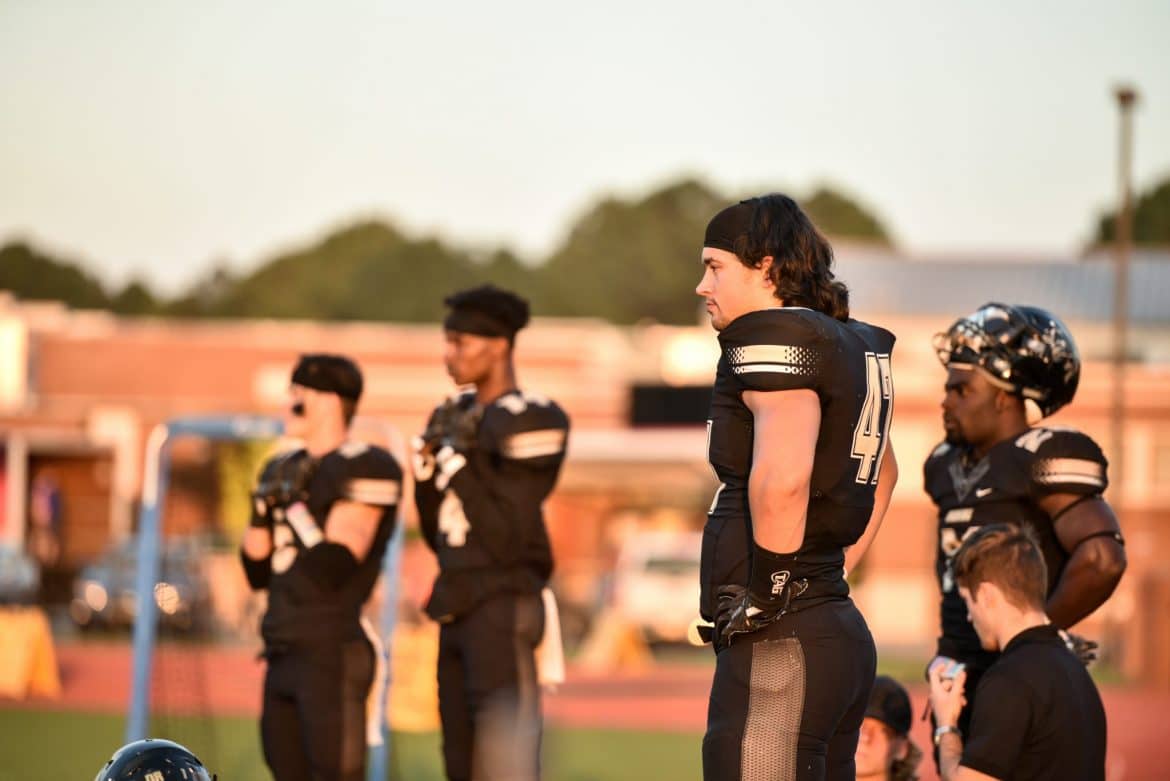 The day was Sept. 17, 2017. Bisons first-year head coach Paul Simmons told his team the story of Shadrach, Meshach and Abednego. Before the three men were thrown in the fire, they said God could save them from being burned alive. Even if God chose not to save them, they still would not bow down and worship other gods. The Bisons just fell to 0-3 the day before with a heartbreaking 27-28 loss to Southern Nazarene University that left the team feeling hopeless. Simmons wanted his men to see that God could still redeem their season, and even if they kept struggling, they would still honor God.

Fast forward to Sept. 19. The Bisons faced 95-degree heat as they hit the field for a long afternoon of practice. This was the biggest day of their season, Simmons said.

“I told the coaching staff that what happened today would be a big determining factor of what kind of men we have, because we’re 0-3 and it’s 95 degrees,” Simmons said. “Whatever energy they come with is going to have to be intentional, and they’re going to have to create some enthusiasm and honestly fake it. We weren’t feeling any joy at that point.”

Simmons was pleased with the results.

“They had the best practice of the year,” Simmons said. “They were flying around the field and were encouraging each other. That said to me that they weren’t giving in and were willing to stand and fight with me. That was the turning point.”

Since that practice, the Bisons have had a perfect 11-0 record and won of their last three playoff games. They made history after defeating Ferris State University in Big Rapids, Michigan, last weekend on a last second 20-yard field goal by senior kicker Tristan Parsley which advanced them to the Division II National Semifinals. The Bisons were considered underdogs in all three of their playoff matchups as the three teams had a combined 33-2 record.

When a team wins 11 in a row, eight of those being road games, it shows that the athletes are doing all the right things to avoid falling back to their early season ways.

“It’s been a case of the guys continuing to get better. They’ve refused to be complacent and satisfied with where they are,” Simmons said. “We’ve improved in the areas that we did so poorly in through the first three games. You can’t really point to one thing and say it has changed; it’s just been a whole bunch of guys holding the rope and refusing to give in while loving each other.”

The veteran team members on the roster are no strangers to winning streaks. Last year, the Bisons won 13 consecutive games before falling in the quarterfinals against Northwest Missouri State University. Junior wide receiver Kohl Blickenstaff said that this year’s slow start has made this winning streak different.

“It’s the 0-3 thing more than anything. I don’t think we would be here if we would have lost three games sporadically,” Blickenstaff said. “Starting 0-3 brought us together more than last year. Not to say that last year’s team wasn’t close, but when you’re literally at the very bottom you have to come together.”

One of the main reasons the Bisons crawled out from the bottom has been freshman running back Cole Chancey’s performance throughout the season. Chancey has 1,239 rushing yards and 14 touchdowns, six of those in the playoffs. He was a key factor in the win against Ashland University, where he scored four touchdowns. Simmons praised Chancey for his success and bravery on the field.

“Cole is a complete beast,” Simmons said. “He has had as much to do with turning this season around as anybody. He’s not afraid of anything. When I told him that he was doing a great job of running the football after the first quarter of the Ashland game, he told me that he had the ‘big dog’ by the throat. He’s a warrior.”

Chancey said that experiencing the win streak is something that will stay with him forever.

“Just to think that I was playing in the high school playoffs last year and am now competing for a national championship is never something I thought I’d be doing,” Chancey said. “It’s been a lifetime experience and something I’d never forget.”

With the matchup against No. 2 seed Texas A&M Commerce looming tomorrow, the Bisons know that this game is their toughest yet. The Lions lead Division II in passing and have seven Division I transfers on the roster. Being underdogs once again, Simmons thinks anyone would be crazy to count his team out.

“When you put together a group of guys that have some talent but also have a tremendous love for each other and desire to honor God in how they’re doing things, good things happen,” Simmons said. “When you look back on what God has done this year, it would be really, really crazy to bet against us right now.”

The game is set to kick off at 2:30 p.m. tomorrow in Commerce, Texas. It will air on ESPN 3 or the Watch ESPN app, as well as on KVHU 95.3. Texas A&M-Commerce has 500 seats reserved in their stadium for the Harding community. Tickets may be purchased on the Lion’s website at wearelionstix.universitytickets.com. Harding is also having a tailgate from noon-1:30 p.m.

The student body is taking a bus that will leave from the student center at 7:30 a.m. to the game that has 58 spots total. The bus will return by 11:00 p.m. Saturday and the cost is $10 per person to ride and open to everyone. Email sa@harding.edu if interested.

All I Want for Christmas are my Two Cheap Gifts