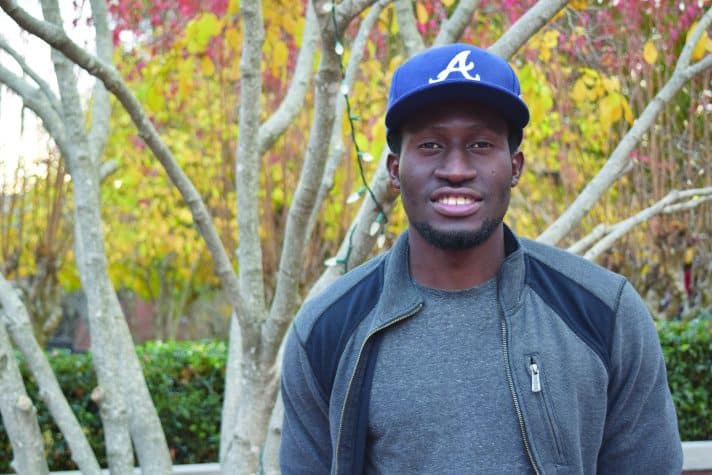 He visited Uganda once, then he quit his job and opened a coffee shop.

Larry Norman learned about Kibo while working as a professor at Rochester College in Rochester Hills, Michigan. He worked with Kibo board member Dr. John Barton, who was then provost of the college. After his wife became involved in a nonprofit benefiting Africa, the couple decided to become involved with working in the continent. Norman approached Barton and asked how to become involved in Kibo. Norman then visited Uganda and developed a passion to support the program.

“The first thing I did was quit my job,” Norman said. “I said (to Barton), ‘I was going to work part time, but now … I am going to dedicate my time to Kibo. I want to start a coffee shop here.'”

Norman arrived home with 50 pounds of coffee in his luggage, which was obtained from the Source Cafe in Uganda. He set up a coffee pot in the student center of the college and sold cups of coffee in order to help fund the organization.

After searching for a more formal location to create a fully working coffee shop, he was given the opportunity to transform a section of a former conference room into what is now Kibo Corner, where all proceeds support Kibo. The coffee comes from the Source Cafe and is grown by Ugandan farmers.

Norman was later invited to be the executive director of Kibo, a position he has held for four years. Since then, he has maintained connections with Ugandan and U.S. leaders and board members. He continues to work at Kibo Corner along student volunteers every weekday serving coffee at Rochester College.

In Searcy, a similar business model was created by fellow Kibo board members. Midnight Oil Coffee house was purchased by In Step Properties, which included Kibo members Brooks Davis and Dr. Leon Blue, for the purpose of running Midnight Oil in support Kibo. Dr. Ken Turley, chairman of the exercise and sports science department, purchased the property in 2010. It was then renovated and reopened in 2010 under new management.

“We had a dream of utilizing Midnight Oil as a way of financially supporting Kibo, but also as a center of interest to be able tell the Kibo story and particularly influence students at Harding,” Blue said. “We hoped to be able to expose them to redemptive efforts in social justice health, women’s empowerment, environmental issues as these ran parallel to efforts to improve and enrich the lives of those in Uganda and East Africa through the gospel and these efforts that we felt were essentially a part of the gospel.”

According to Kibo board member Mark Moore, the coffeehouse generated approximately $28,404 in 2016, which was used to provide income for Kibo staff and funds for various projects. Blue said the Kibo Midnight Oil Board is planning an expansion of the shop’s patio, complete with an outdoor fire pit and stage.

“On the American side of things, our job is to continue making sure Ugandans have what they need to solve their own problems,” Kibo Director of Development Zachary Abney said. “Our goal is not to fix anybody’s problems for them; instead, we want to empower villagers to create local and sustainable solutions for the obstacles they face.”

Abney was less than a year old when he first traveled to Uganda. His parents were among the five missionary families who moved to Uganda in 1994. When he was a sophomore at Harding University in 2014, he interned with Kibo in Uganda with a group of students. The initiative created the Kibo Fellowship internship program, which is now available at Harding University, Oklahoma Christian, Pepperdine University and Rochester College.

“I really wanted to go on an internship that was more in this learning style,” Abney said. “Having grown up in Uganda and seeing what actually goes on there as a kid and visiting several times before school, I wanted an experience in Uganda that was more focused on me going to learn and being mentored by Ugandans who knew the problems and knew the solutions to the problems.”

Abney was one of the founders for the Kibo Fellowship internship, which allows students to learn the Kibo approach to faith-based sustainable development. Students stay in Jinja, Uganda, for approximately four to five weeks. They work in the Source Cafe, spend a weekend at the home of a local Ugandan family and follow Kibo employees and development workers as they travel to villages.

Junior Sarah Creeley participated in the Fellowship in 2016. Creeley said she had been interested in nonprofit work years prior to interning with Kibo and wanted to learn from a successful group.

“The internship completely rocked my world,” Creeley said. “I knew sustainable development was something I was really interested in. By interning with Kibo, I got to see the holistic approach and what they are doing to meet people’s physical needs before they meet their spiritual needs.”

The Kibo Fellows travel with Norman and Kibo board member Danny Cagnet. They stay in downtown Jinja and drive up to three or four hours to reach the villages they work in.

Norman said the internship is designed to teach students about sustainable development, the idea of equipping local people to maintain and improve using their own resources over time. He said that Western people often become part of the problem when they try to fix the problem without teaching the locals how to do the work themselves.

Creeley said it was difficult for her to learn how to work to help others for long-term self-sustainability instead of temporarily helping to serve an immediate need.

“We were all expecting to work, to dig the wells and get down and dirty. There were days and moments when we did have those opportunities, but for the most part, it was just following the Kibo staff members and observing how they interact with people,” Creeley said. “You can’t always have a (Western) group of people come in and fix things. That’s not how Kibo operates, and that’s not what’s beneficial for these people. It was very challenging, but it is something I am super, super thankful for.”

When Kibo fellows return to the U.S. after the internship, they are ambassadors for the organization and responsible for telling others about it.

To the Peak Together

Freshman Mark Sekimpi arrived in Little Rock in August 2016 to begin a four-year education at Harding. He was given the opportunity to study abroad with the help of Kibo, which is helping to provide his funds.

Sekimpi said Kibo has directly influenced his life, not only by providing a college education, but also by teaching his parents new worldviews.

“(Growing up with Kibo) has positively affected my upbringing because Kibo is an organization that bases from a Christian foundation, so it builds up with Christian moral standards. With that, I was able to be raised with these standards of being honest, not being selfish, sharing, loving caring and serving,” Sekimpi said. “Through my mom working for Kibo, she has been a very great mom and a very great example to us as her children. With the help of Kibo, it gives my mom a job so she can put food on the table. Kibo is a good organization and a unique one.”

After he graduated high school, Sekimpi spent a year volunteering with Kibo. He worked closely with the Water, Sanitation and Hygiene program, helping to drill wells and assisting communities to earn them.

“It is a type of nonprofit that comes in a place and works with the people, makes relationships with the people, and once it’s done, it goes back and visits the people, sees how they are doing and encourages them to continue with the lessons that they taught them,” Sekimpi said. “It’s a good organization, and it’s a unique way of working.”

Sekimpi is currently pursuing a business degree. He said he would like to use his degree in Uganda for banking or real estate.

Through the church-planting missionaries and his connections with Kibo, Sekimpi has begun his own uphill journey nearly 20 years after the missionaries first took root in the small country in East Africa.

According to Dr. Deron Smith, Kibo board member, the key to successful mission work is the slow and gradual journey. For Kibo, the goal is to help Ugandans reach to the ascending point of the mountain, to hike from Kibo Point and eventually, together, reach the ultimate peak: heaven.