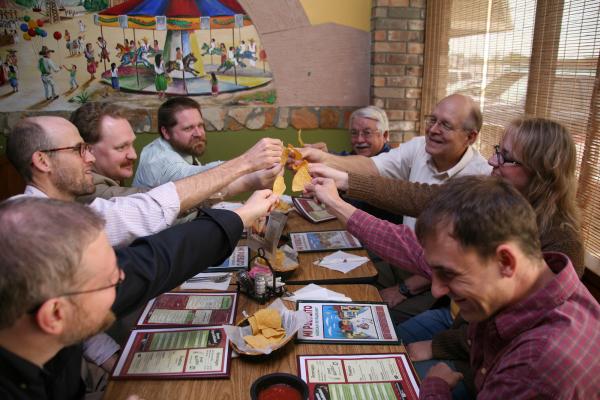 At 11:30 a.m. every Thursday, several professors from the English department began congregating in the hall for their highly anticipated weekly tradition, eating at Mi Pueblito restaurant.

Professor of English Ken Hammes began the Mexican food tradition 11 years ago at Mi Ranchito when he took his daughter and a student there to eat. For the past five years, seven of the men from the department had faithfully attended the luncheon.

“It’s the anticipation,” Michael Claxton, associate professor of English, said. “It’s like Christmas morning; you spend weeks thinking about it. Every Thursday at about 9:00, I start dreaming of the chips and the sauce and the camaraderie. Most of the fun is talking about how much we’re going to eat on the way there. We never can eat as much as we talk about, but it’s kind of trash talk. We’re all really good friends. We know each other way too well, so we know how to entertain each other.”

It came as no surprise that lunches attended by these English professors were packed full of funny stories, literary humor and memorable moments.

“I don’t remember what possessed Dr. Claxton to do this, but one time after we ate, he thought he would just vault over a rail and he did,” Larry Hunt, associate professor of English, said. “When he came down, his foot hit one of the parking lot concrete blocks and he fell. It was one of those slow motion kinds of falls. I had time to do something, but my brain just didn’t engage. So [I] just had to watch him go down. He didn’t get hurt, but it was very funny.”

The faculty agreed that the lunches provided a welcomed time to bond outside of the office, allowing them to express themselves honestly through good times and bad.

“We’ve been there for each other when there have been deaths in our families and things like that,” Claxton said. “So it’s not all just fun. I feel that these are my best friends. There used to be a guy named James Benge, who was a part of the group, but he took a teaching job out of state. He sometimes emails us funny things he has read and that he thinks we should talk about at lunch. He tries to stay a part of it. It never leaves you. You’re always a part of the Pueblito gang.”

Between poking fun at each other’s quirks and stuffing their mouths as quickly as possible, these men had learned over the years what blessings such friendships bring.

“We have become genuine friends, all of us,” Heath Carpenter, instructor of English, said. “Putting your feet under the table with someone always sort of changes your relationship with them. You start dipping those chips and filling you belly with dense cheese-filled substance, and it makes guys who get up in front of classes and are experts in their fields like little girls at a sleepover. Things that were kind of funny become really funny, and the things that were really funny become hilarious. You start laughing at things that aren’t really funny and crying over it. You’re making fun of each other like teenagers. That’s every Thursday.”

Where Are They Now?