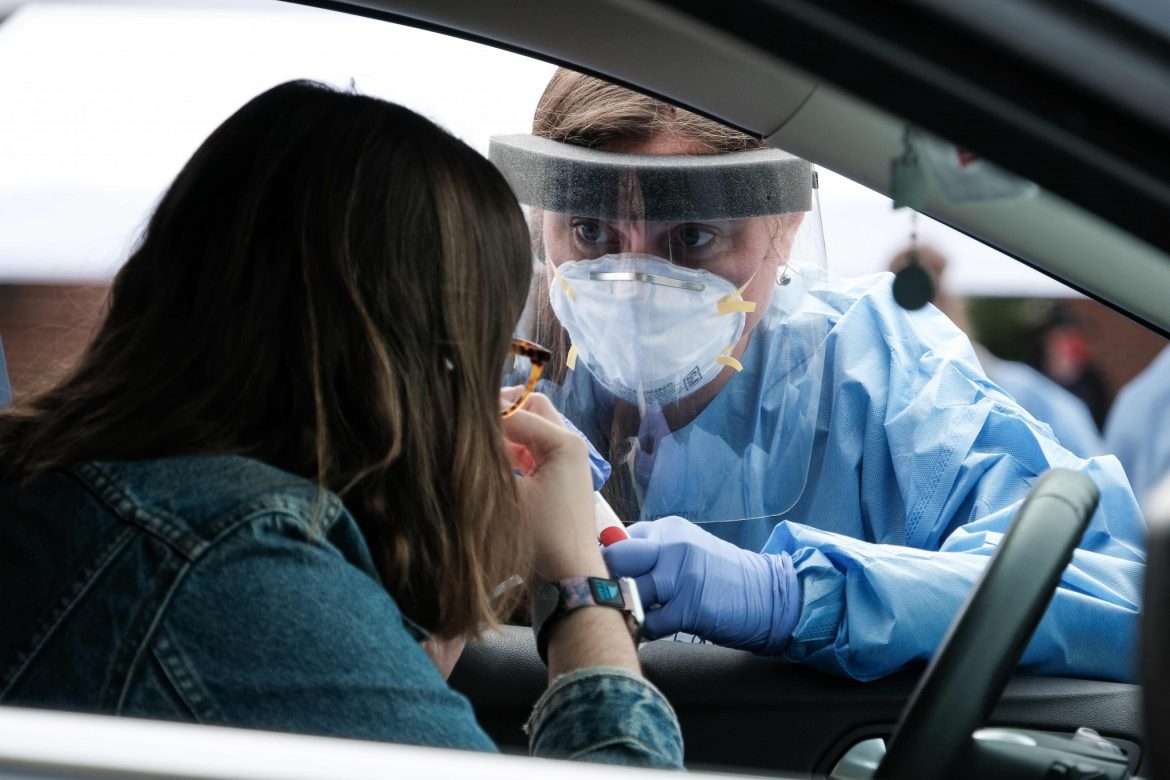 Nurses with Arkansas Department of Health work with the public during a voluntary COVID-19 testing event on campus Oct. 20. (Photo by Audrey Jackson)

The Arkansas Department of Health (ADH) and the Arkansas Foundation for Medical Care (AFMC) conducted a voluntary testing event for Harding students and employees on Tuesday, Oct. 20, and 179 were tested. The event was from 9 a.m. to 4 p.m., and testing was free. There was drive-thru and walk-up testing located in the parking lot north of the Hammon Student Center.

Dean of Students Zach Neal said ADH contacted Harding at the end of last week to set up a testing day.

“They inquired in a way that said they had seen recent numbers that are public numbers, and they felt like [a testing day] would be of assistance to the University,” Neal said. “And they asked what day they could come.”

Public Information Coordinator Danyelle McNeill said AFMC works as an extension of the ADH with a strike team to go on site and set up swabbing stations and make sure all the protocols are handled properly.

“Our main focus is to get contacts tested so they know their status,” McNeill said. “That is the primary focus of these testing strike team events. Especially when your cases are up, and you have more contacts, and you want to get them tested in a timely fashion.”

She said if someone showed up and said they wanted to get tested and were not a close contact, they wouldn’t be turned away. The AFMC sent all the specimens collected to Little Rock, Arkansas, to be tested. Depending on a positive or negative result, individuals were told they would receive a phone call or a text message from the ADH with their results.

The campus wide email sent by the University on Monday and Tuesday laid out the procedure after receiving a result:

“A negative result will require no further action on the part of the participant. A positive result will require the participant to follow University directives by isolating themselves immediately for the required ten days and providing a list of all close contacts during the period beginning 48 hours prior to submitting the test sample until receiving the test results so that the close contacts may be notified to quarantine for the required 14 days.”

Student Health Services (SHS) did not conduct any testing on Tuesday and sent everyone who was a close contact to be tested by AMFC behind the Student Center. As they were contacted on Tuesday, the SHS notified students of the testing event.

“Faculty and staff obviously have contacts around town and their own doctors,” Neal said. “But this gave a very convenient way for them to also have the same service.”

International Programs Administrator Janis Ragsdale said it was her first time to get tested.

“I had heard about the self swabbing, but I had never done it,” Ragsdale said. “It was my first time, and it was an adventure.”

Sophomore Gabi Gonzalez received a COVID-19 test on Tuesday and said she appreciated the opportunity she was given to get tested so easily.

“I think it will help a lot of students to get tested just because it’s easier access,” Gonzalez said. “That’s super helpful.”