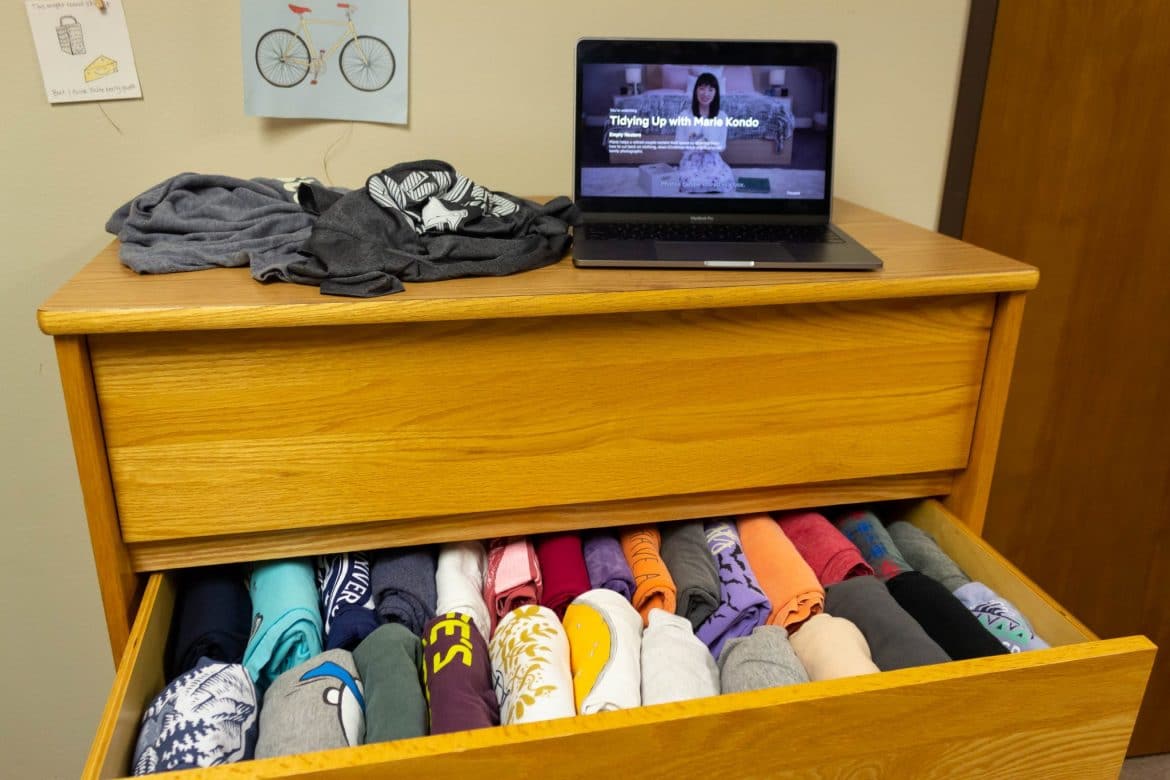 With the new year ringing in, many people decided to hop on the bandwagon of “tidying up.” The new Netflix show “Tidying up with Marie Kondo,” inspired many people to organize their homes, dorms and apartments with the help of Kondo’s organizational style.

After the Netflix show was released, junior Taylor Sexton set her new year’s resolution to become more organized. Kondo says to keep things if it “sparks joy in you.” If the item doesn’t spark joy, then it’s safe to be thrown out, but make sure to thank the item first.

“I didn’t go as far as thanking the things I was getting rid of, but I did end up keeping the items that still sparked joy in me,” Sexton said. Sexton has followed some advice from the show such as Kondo’s tips, for folding clothes and organizing papers.

“I honestly think having my room decluttered will help me be more productive,” Sexton said, “I don’t have to go back to a messy room and feel stressed out about the mess.”

Sophomore Haley Grizzell, practices some tips of her own to stay organized. Grizzell likes to prioritize, tidy up her room every night before bed or in the morning, take the trash out whenever it’s fully and organize something every day to keep things in order. For Grizzell, cleaning is a stress reliever.

Behavioral Science professor Travis McNeal points out some psychological effects that being organized or being cluttered could have on you. McNeal said there is research which shows people who have clean homes are physically healthier.

There are also many other studies that focus more on the psychological effects cleanliness has on people.

“There was one study I found about women who describe their homes as ‘cluttered’ or ‘full of unfinished projects’ were more likely than other women to report being depressed or fatigued,” McNeal said, “So, there’s some evidence that being in a cluttered home has an effect on your emotions or energy.”

McNeal referred to another study that found cluttered homes were associated with an increase in cortisol, which is a stress hormone.

“When you’re trying to do a task, if there’s a lot of task irrelevant stuff, like a dirty or disorganized cluttered space, then it’s hard to focus on your task and your visual cortex gets overwhelmed. You’re distracted and you don’t function as efficiently in problem solving, work, and things like that.” McNeal said.

Attending college can be stressful, but with an organized living space it can be a lot easier to stay motivated. It might even spark joy.