Home Student talents perform at Get Down Downtown

Student talents perform at Get Down Downtown 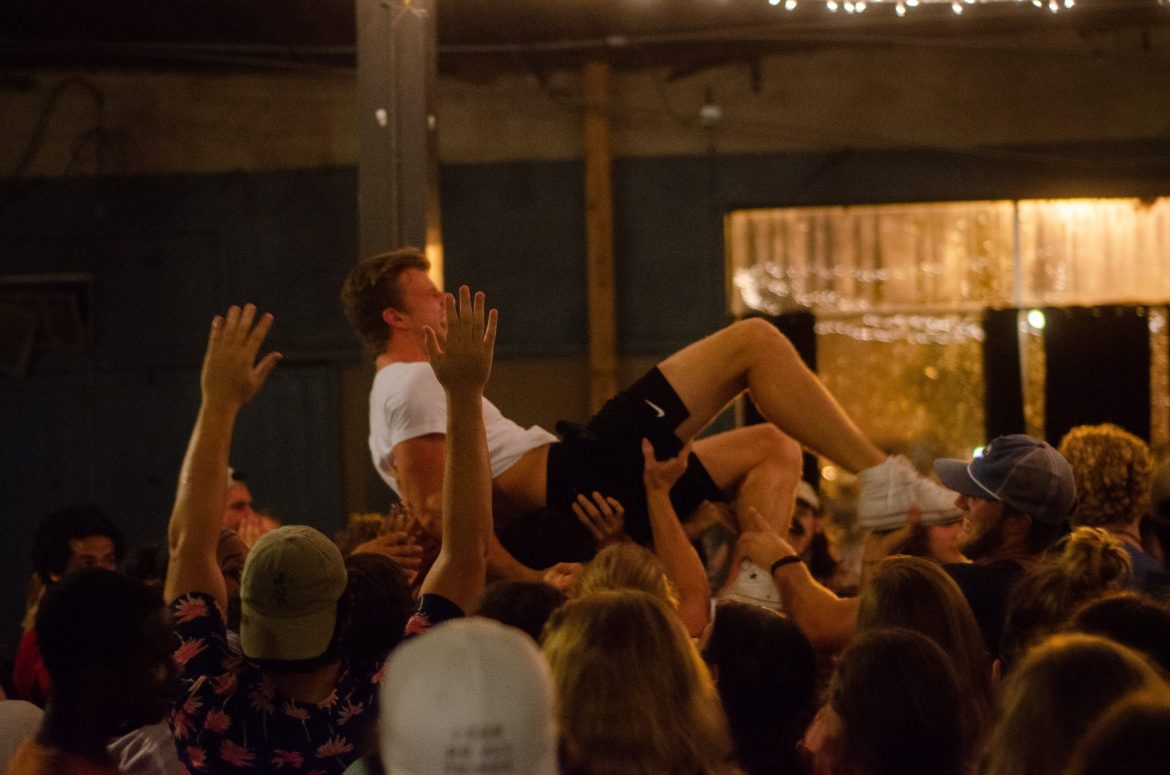 A member of Sawyer's Mill band crowd surfing at a performance at Zion Climbing Center in Searcy, AR, on Sept. 21. Sawyer's Mill will be performing at 7 p.m. at Get Down Downtown in Searcy on Sept. 28. | Photo by Jordan Huntley

Harding University students will be performing at Get Down Downtown, an annual two-day, family-friendly, outdoor festival featuring live music, vendors, games, rides and other activities in downtown Searcy. The festival is today, Friday, Sept. 28 from 6-9:30 p.m. and Saturday, Sept. 29 from 10 a.m. to 9:30 p.m.

The group was started in the spring 2016 when Brasher and Jones pledged men’s social club Gamma Sigma Phi together. The style of Sawyer’s Mill is indie/folk, and they find inspiration from groups like Arctic Monkeys, Catfish and the Bottlemen and The Strokes, and are looking forward to creating some acoustic/folk content in the future with a similar sound like The Hunts.

Jones said that the band name came about when Brasher thought it would be a cool idea to name the band after the wood sign company Jones and his father own.

Brasier said all of their songs are pretty personal.

“Home is about basically being away from your home, but no matter where you are, home is being surrounded by people you love and you will get that taste or flavor of home,” Brasher said.

Jones and Brasher said they are just playing to have fun right now, and love playing hype shows for their peers.

“It will be really cool to have these college shows and memories to look back on,” Brasher said.

Brasier and Jones said they really enjoy playing for their peers in a local setting because they really get into the show.

“When you play on a smaller scale like this it’s a lot of fun for us and the crowd because they know us and we know them,” Jones said.

Junior Dara Niemi, began singing around 11years old. Niemi’s genre is pop-country, and she gets her inspiration from Maren Morris and Kelsea Ballerini. She previously sang for Harding’s student body when she opened for Jesse McCartney on Feb. 18 2017 and has performed for Get Down Downtown in 2017.

Niemi typically plays solo just her voice and guitar – and will performs covers of popular songs and a few originals.

“Kiss Somebody Else is about my boyfriend because, when we first started dating, he always had this saying: ‘I’d rather fight with you than kiss somebody else,’” Niemi said. “So, I went to Nashville and took that idea with me, shared it with the people I was working with and they told me I had to use that idea. It’s really close to me because it has a lot of memories with it.”

Niemi was recently nominated for the Georgia Country Awards state Female Artist of the Year.

Niemi said she wants to inspire her listeners when they listen to her music.

“I want to inspire them to never give up. There have been times when I think this is not for me, but God always has that door he wants to close and another one he wants to open,” Niemi said.

Niemi said she loves performing in front of her peers.

“They always have good feedback and constructive criticism to give me after my shows. They are about me and they want me to do my best,” Niemi said.