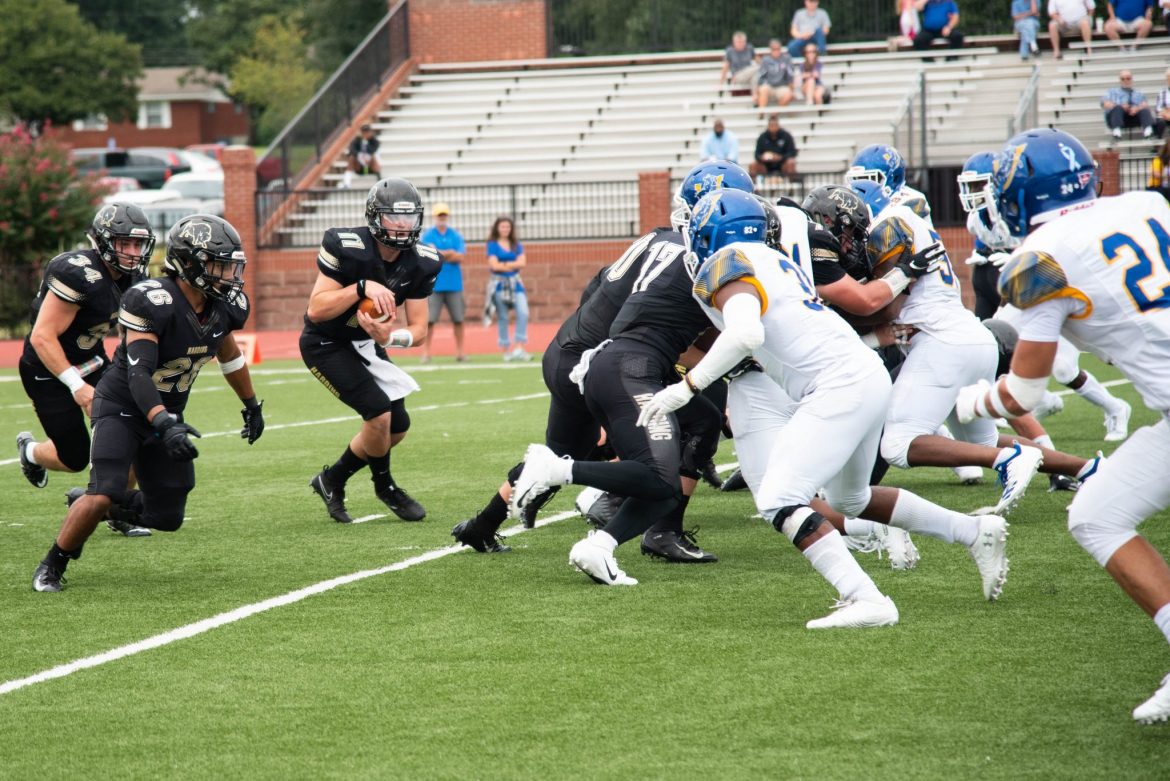 The Bisons played their first home game of the season Sunday afternoon against Southern Arkansas University. The game was scheduled for Saturday night, but had to be moved to Sunday afternoon due to lightning.

The game was a tale of two halves. The first half was all Harding, the team jumped out to a 14-0 lead in the first quarter. The second half the Muleriders put up 21 unanswered points, including a fumble recovery returned for a touchdown by senior defensive end DaVondrick Lison with just under a minute remaining in the game. Harding would get a quick score but would fail to recover an onside kick and end up losing the game.

“It is tough to win a game. There are a lot of ways to lose a game, and we figured out a few ways to lose one today. Tough loss, but we will bounce back,” Bisons head coach Paul Simmons said.

The Bisons defense came out strong, giving up just three first downs in the first half. They gave the offense a short field on their second touchdown drive, thanks to an interception by senior defensive back Dra Smith. The defense also closed the door on a Mulerider drive that started in Harding territory with an incredible pick by senior defensive back Frank Herbert.

“I was basically disguising our coverage by showing press, and once the ball was snapped, I bailed into coverage,” Hebert said. “The ball went up, and I flocked right to it.”

The only Southern Arkansas points in the first half came of a 21-yard scoop and score by freshman defensive back Brock Floyd. By all accounts Harding looked to be in complete control of the game at intermission.

“I felt like there were chances in the second half to put them away, but we did not do it,” Simmons said.

In the second half Southern Arkansas took a while to get going but would score their first offensive touchdown on a long 15 play, 89-yard drive that made it 17-14. After a Harding punt, the Muleriders would capitalize on their next possession, taking it to the end zone again to give them their first lead of the ballgame, 21-17, with just under 8 minutes left on the clock.

The Bisons had two drives to try and regain the lead, but they were both cut short by mishaps. The first ended with a dropped pass by sophomore running back Romar Reades, the other was the scoop and score with under a minute remaining in the game. The air attack did look good, sophomore quarterback Preston Paden connected with senior wide receiver Kohl Blickenstaff for a 35-yard touchdown to cap off a 16 second drive. The Bisons would fail to convert a two-point conversion, which made the score and the game end 28-23.

“There will be a day when the defense does not play well and the offense has to carry us,” Simmons said. “The bottom line is this: If you are going to be a championship level team, you have got to have some games that you win where you do not play very well.”