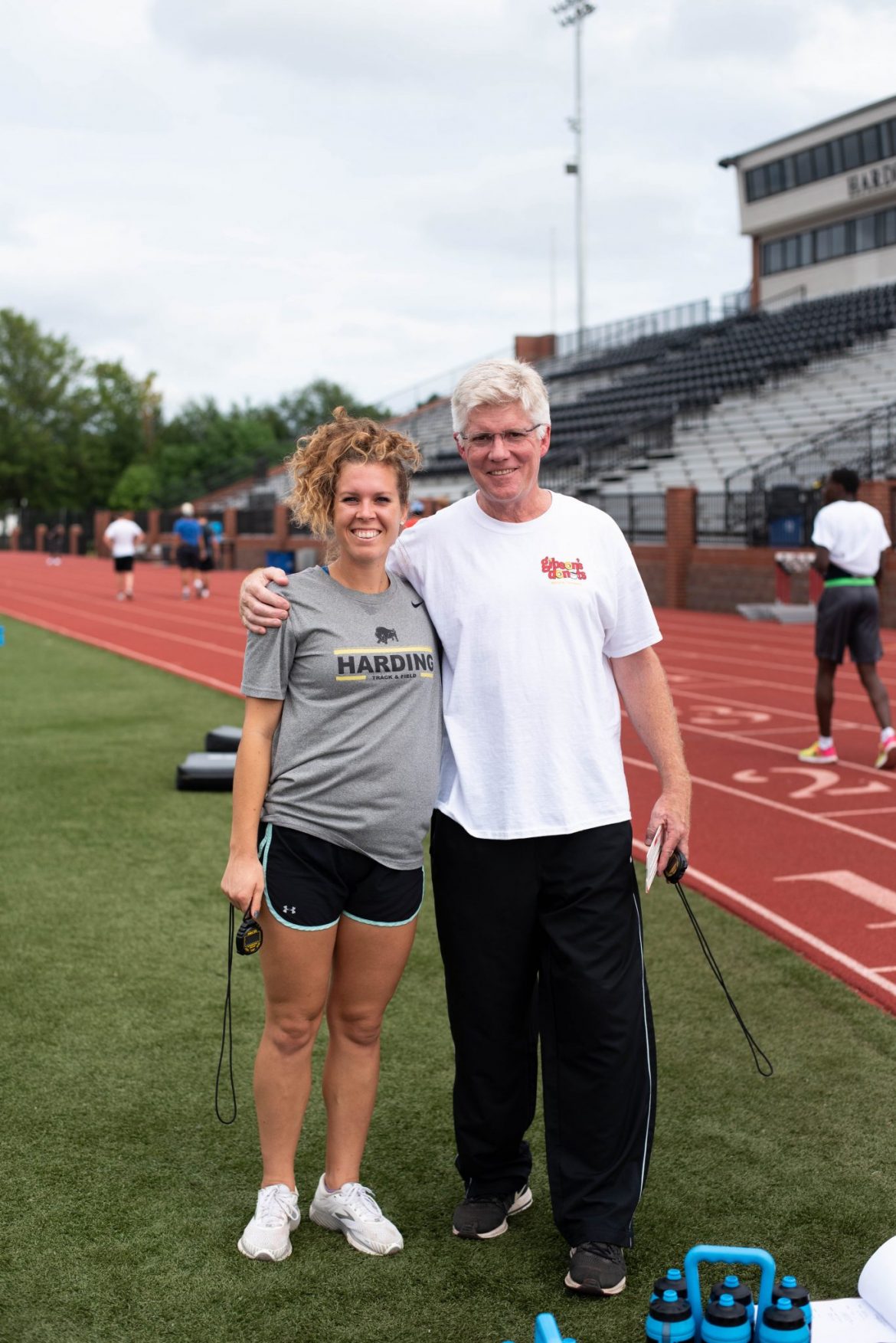 For the last 17 years, Harding Track and Field and Cross-Country Coach Steve Guymon has spent his time treaching young Bison athletes about more than just running. This year, however, he will have two full- time assistants helping him along
the way.

Guymon grew up in Memphis, Tennessee. His dad was a professional baseball player, and in seventh grade, Guymon said he tried to follow in his father’s footsteps.

“I went out for baseball and got cut,” Guymon said. “I went home and my father said, ‘either you get a job or you find another sport.’”

So he decided to run track. In college, he was a runner for Oklahoma Christian University. Guymon said he had a decent career but one day decided he wanted to be on the other side of the whistle.

“I remember I was out running and talked to the coach and thought, ‘I might wanna do this,’” Guymon said.

Guymon began coaching girls’ junior high basketball in Oklahoma, where he was responsible for leading a team of 41 girls. He was asked to return to Harding Academy of Memphis as both a track and football coach soon after.

His passion for coaching later led him to the University of Kansas as a graduate assistant. During his time at Kansas, Guymon said he wanted to coach the best. In 1992, he got that chance when mile runner Cathy Palacios finished the season as an All-American.

Guymon said his focus shifted at that moment. Rather than focusing on championships and All-Americans, he focused on building relationships with his runners.

“I don’t know everything there is to know,” Guymon said. “But I think when the runner and the coach develop that relationship, things happen.”

Guymon spent a few years in Memphis at Cordova High School before coming to Harding University in 2002. When he joined the team, it consisted of only 19 members, but, under Guymon and former part-time Assistant Track Coach Bryan Phillips, the program grew.

When Phillips stepped down last year, Harding made the decision to hire two full-time assistants in his place, former Harding athletes Josh Syrotchen and Cathy Ebenja.

“I was shocked and very appreciative,” Guymon said. “I wasn’t sure how to handle that because I’m used to doing things pretty much on my own.”

Syrotchen was a star thrower at Harding and is now in charge of coaching current throwers. Ebenja coaches the sprinters. Both say they have learned a lot about coaching from their relationship with Guymon.

“[Guymon] has a relationship with the athletes,” Syrotchen said. “Most times when an athlete comes to the office, he already knows why they’re there, and that’s because he has that relationship.”

Guymon described those relationships as opportunities to be a part of his athletes’ stories.

“There [are] so many stories along the way,” Guymon said. “I can take each person, and there is something about them, some story about them.”

Guymon added he could not begin to count the number of runners’ stories he has been able to be a part of.

“Cathy and Josh are stories in themselves,” Guymon explained. “They came here for different reasons and became All-Americans.”

Now, Guymon has the chance to lead the next group of runners and coaches.

“There are lots of kids and lots of stories,”Guymon said.“I guess that’s why I keep doing it.You just keep going one more year because you know something’s going to happen.”

He said he does not know how much longer he may coach, but he added that Syrotchen and Ebenja have provided him with a new challenge.

“I’m going to turn 57 this fall, so they’ve got all this energy and have kind of revived me,” Guymon said.

Harding’s next cross-country meet is in Louisville, Kentucky, on Sept. 29.

Just the Clax | The Other Rocky

Shifting Focus | Through the Tempest