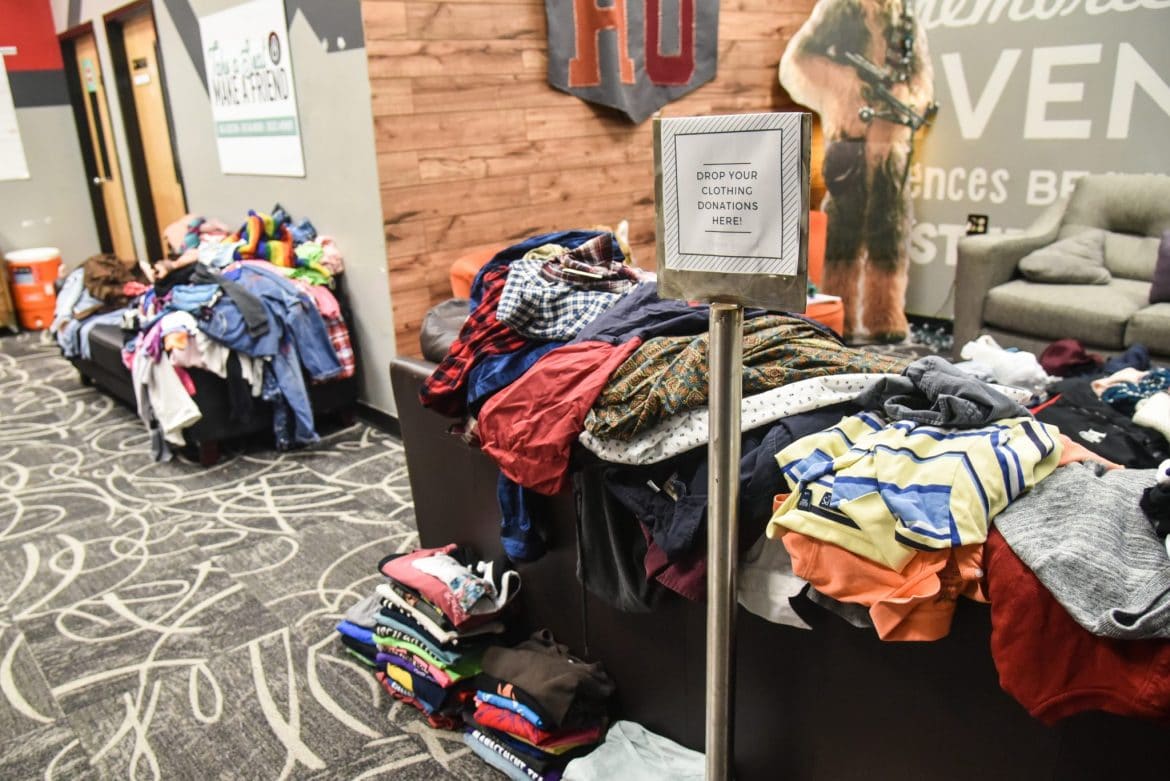 Donated clothes sit in piles in the Campus Activities Board office as part of preparations for CAB’s pop-up thrift shop, which will be held March 22. The clothes have been collected from dorms across campus, and the proceeds from the thrift shop will be given to local nonprofit Make.Do. Photo by Sterling McMichael

Throughout the year the Campus Activities Board (CAB) puts on a variety of events ranging from concerts to movies to open mic nights. On Thursday, March 22,  CAB will be hosting a new event: a pop-up thrift shop.

The event will be from 9 a.m. to 6 p.m. in the CAB office, with makeshift dressing rooms available for use.

According to senior Presley Nixon, who had the idea for the event, all donated clothing items will be accepted, no matter the type, and nothing will be discarded unless it is unwearable.

Donation bins for clothes for the pop-up shop have been placed in every dorm lobby on campus, and clothes may also be dropped off in the CAB office.

“So far, we’ve just been going through and sorting them by size,” Nixon said. “I think we will have a $1 bin or a 50-cent bin with tons of T-shirts.”

Nixon said she had the idea for the pop-up thrift shop after interning in the summer of 2017, with Sseko Designs, a sustainable fashion company that creates opportunity for women in Uganda.

“During my internship, I learned to pay attention more to where my clothes are coming from. Like, who’s making my clothes, and are the products I’m using sustainable and environmentally friendly?” Nixon said.

Nixon said she was drawn to the idea of a thrift shop because it allowed clothing to be reused, but in a more affordable way.

“Sometimes ethical fashion brands are very expensive, and it’s just not practical for a college student to spend that much money,” Nixon said. “(But) one way that you can kind of pursue that ethical fashion lifestyle is through buying used clothes.”

Nixon felt hosting a thrift shop could give students the opportunity to practice this kind of practical and ethical fashion.

She also has enlisted the help of several fashion merchandising students in hopes of including upcycled apparel to sell, such as items like embroidered jeans.

“Instead of just throwing away your clothes and them ending up in a landfill, people have an outlet to take their clothes somewhere and also buy clothes that are already out there instead of going down that fast fashion route and buying more new clothes,” Nixon said.

Nixon said she was inspired to share this environmental passion with fellow students after hearing about a pop-up shop that a fellow Sseko intern organized at another college.

Fellow CAB worker junior Sydney Warren will be working the pop-up shop alongside Nixon and said she believes the event is something everyone can participate in.

“I think it’s a good idea because we all have extra clothes that we maybe throw away or give to an organization we don’t know much about,” Warren said. “But this way, we know exactly where the clothes are going and what it is going to support.”

All proceeds from the shop will benefit Make.Do., a local nonprofit organization dedicated to restoring hope through “creativity, connection and compassion.” The nonprofit supports girls and women in the community.

The organization offers various sewing and crafting classes throughout the year.

Nixon said she chose Make.Do. because she believed in its mission to build confidence through creativity.

According to Make.Do.’s founder Jo Ellis, the event will benefit the nonprofit more than just financially.

“I hope this will benefit Make.Do. mainly just by spreading awareness of Make.Do.’s mission and organization on campus,” Ellis said. “Obviously, there is a financial benefit to Make.Do. as well, as all the proceeds are benefiting us, but that’s kind of secondary to our community on campus … I’m really hoping that students will become more involved in the bigger picture of Make.Do.”

Nixon has the same goal in mind for Make.Do., hoping people leave “believing in it and excited about it.” Nixon hopes to have sign-up sheets available at the pop-up shop for people who want to participate in upcoming Make.Do. classes.

From Baltimore to Seattle: 4,000 Miles for Cancer