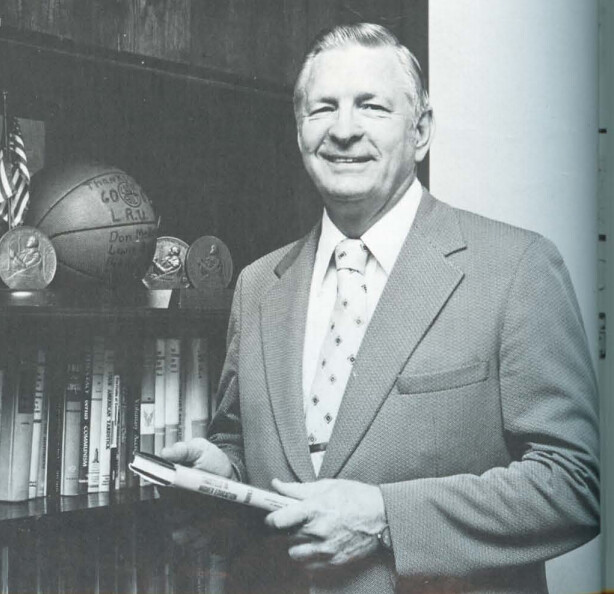 “At age 97, surrounded by family, my Pawpaw died this evening,” his grandson, Bill Ganus, said in a Facebook post. “He chose to live life to the fullest.”

Chancellor Ganus first came to Harding College in 1939 as a student. He graduated and married his wife, Louise, in 1943 before returning in 1946 to teach Bible and history. After serving as vice president from 1956-65, he was named University president until 1987, when he stepped down and became Harding’s first chancellor.

Chancellor Ganus saw the school through many changes during his 22 years as president, including its transition to university status and an 88% increase in enrollment numbers.

A long-time supporter of Harding athletics, Chancellor Ganus was a steadfast Bison Football fan, watching as many games per season as he could. In a University media luncheon on Aug. 21, President Bruce McLarty said that some of First Security Stadium’s renovations in 2018 were made with Chancellor Ganus in mind, such as the addition of an elevator and the remodeling of the press box, which included adding the Clifton L. Ganus hospitality suite.

“It was something that, when we talked about putting an elevator in for this box and all, Dr. Ganus is the face that was just there,” McLarty said. “It was such a rich experience toward the end of last season [2018] that the elevator was done in time for Dr. Ganus to come up [to the press box] and watch a game … He is seriously into the game, and if we want to know anything about any player, we ask him and he tells us.”

Although he was unable to make it to a Bison football game this year, Chancellor Ganus had the chance to greet players as they arrived for the 2019 season on Aug. 7.
Chancellor Emeritus Clifton Ganus served Harding College and University for over 70 years. In a Facebook post on Sept. 9, his son, Cliff Ganus, described the man who impacted many people in many ways.

“Dad was a scholar, an adventurer, an athlete, an administrator, one of the finest teachers I ever had, a good judge of character, an outstanding speaker and lecturer, a patriot, a patriarch and family man, and, above all, a follower of Christ,” Cliff Ganus said in the post. “He treated every person he met with honor and respect. This included world leaders, who received no special deference. He knew where a person’s true worth came from.”